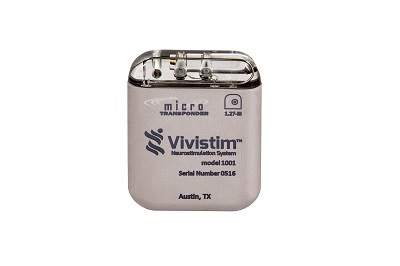 The Vivistim System is intended to be used, along with post-stroke rehabilitation therapy, in patients who have had an ischemic stroke, to electrically stimulate the vagus nerve, a nerve that runs from the brain down to the abdomen—to reduce deficiencies in upper limb and extremity motor function and to improve patients' ability to move their arms and hands.

An implantable pulse generator (IPG), which generates a mild electrical pulse, is implanted just under the skin in the chest of the patient. Attached to the IPG is a lead wire that is implanted under the skin and leads up to electrodes that are placed on the left side of the neck where the vagus nerve is.

The Vivistim System, a prescription device, may be used in both clinical and at-home settings to provide VNS.

It is not approved for use outside of its intended use to stimulate the vagus nerve during chronic ischemic stroke rehabilitation therapy for moderate to a severe loss of upper extremity function. It should not be used in patients with vagotomy, which is the surgical removal of part of the vagus nerve.