MTE successful for early detection of breast cancer in India

Strong foundations have been laid with contributions from Bayer India, National Association for the blind India Centre for Blind Women and CK Birla Hospital for Women 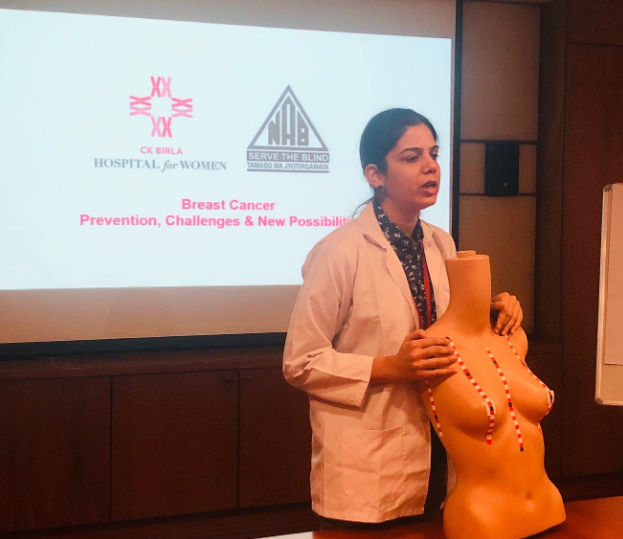 In his presence, the CK Birla Hospital for Women, Gurugram and the NAB India Centre for Blind Women revealed that his method’s application saw a high level of sensitivity in the early detection of breast cancer among women screened in Delhi NCR over the last three months. A validation study was started by the CK Birla Hospital for Women and NAB India Centre for Blind Women in March 2019, with support from the Bayer Crops Science Group in India in collaboration with Discovering Hands, Germany.

Commenting on the findings emerging from the study, Dr Mandeep Malhotra, Director, Surgical Oncology & The Breast Centre, CK Birla Hospital for Women said, “The country is witnessing a steady rise in incidence of breast Cancer (~11.54%,  Globocan 2012) and also mortality due to the disease (~13.82%, Globocan 2012). In urban areas, one in 22 women are likely to suffer from breast cancer during their lifetime. Of these, 50% may not survive within five years of diagnosis. Inadequate screening and advanced stage of presentation are the contributors to the rising death toll.  Early detection by effective screening protocols is the possible solution.”

According to American Cancer Society Guidelines, the standard screening process of mammography, should start at the age of 45. Breast cancer in Indian women is a decade younger in comparison to western women with peak incidence at 40– 50 years and Indian women have inherently higher breast density. Both the facts suggest limited application of screening mammography in Indian settings. The manual breast screening methods in the form of Self Breast Examination (SBE) and Clinical Breast Examination (CBE) are also sparingly used. SBE is limited by the lack of proper knowledge and confidence and CBE by the lack of sufficient time and resources. In the process of finding a possible solution for early detection, we evaluated the enhanced touch (Tactile Sensation) of a visually impaired (Blind) women, called as Medical Tactile Examiner (MTE), who have been trained to conduct Breast Examination (Discovering hands concept).

In the last 4 months, more than 500 random women from Gurgaon other parts of Delhi NCR have undergone TBE; along with Ultrasound Breast for less than 40 yrs and Mammogram for more than 40 yrs of age. The initial trends suggest very high level of sensitivity for detecting breast lesions. Changes were detected in 30% women, 40% of which were confirmed by radiology and 20% had cancerous or precancerous changes. Majority of them were still at stage I and stage II.  Overall 3.5 % of women were detected with lesions that could have affected them adversely, i.e. the Blind women have been able to improve survival of 17 women in last 4 months. The examination by MTE also involves recording of risk factors for breast cancer including family history, teaching women how to do SBE, encouraging them to undergo timely radiology. Less than 2%, women, were into any kind of active breast screening while post TBE, majority of them started doing Self Breast Examination and have committed to timely MTE/CBE and radiology.

Apart from detecting 17 women with lesions having adverse pathology, extrapolating 1 in 22 lifetime risk in 500 women, the blind women by their skills have improved survival of another 23 unfortunate women who will develop breast cancer in future. The above trends describe the immense potential of Visually impaired women who after adequate training can make a huge difference in tackling the rising menace of breast cancer, thus saving precious lives of us enabled people.

Dr. Frank Hoffmann, eminent Gynaecologist from Germany has developed a methodology known as TBE that uses a standard system based on a patented orientation stripes and high sensory touch of visually impaired women. His social enterprise “Discovering Hands (DH)” trains these women over 9 months to conduct safe, repeatable, and accurate clinical breast examinations without any radiation or side effects. During the examination lasting 30-40 minutes, trained examiners can detect abnormalities which are 50% smaller (6-8 mm) and up to 30% more than doctors in the standard examination. DH has examined more than 1 lac women in Europe. He intends to bring similar success to India and around the globe. One of the study results that he presented says that TBE is equivalent to CBE check-up, hence is a strong option for women to exercise breast screening check-up. Dr. Frank Hoffmann’s (of Erlangen University) study results say; TBE check-ups are equivalent to CBE or even better. As a doctor who has been established for over 25 years, he found that the CBE is often carried out under unfavourable conditions and could therefore be improved.  His idea to turn the disability of blind and visually impaired people into a life-saving talent led to the founding of his social enterprise Discovering Hands.

Speaking on the occasion, Avanti Birla, Founder, CK Birla Hospital for Women, said, “The CK Birla Group is deeply committed to creating sustainable positive impact. Over the last 150 years, the Group has allocated significant resources to philanthropic initiatives. Going forward, a large part of the Group’s impact activities will be focused on Women and Healthcare, in line with our commitment to promoting Diversity not just in our workplace but also in communities around us. HFW Foundation, a charitable institution, is an expression of this commitment. The CK Birla Hospital for Women is working on various initiatives including breast ancer. The HFW Foundation will be supporting this cause.”

Akshat Seth, Chief Operating Officer, CK Birla Hospital for Women added, “One of the first initiatives of the HFW Foundation will be on building awareness for Breast health and improving access to Breast screening. With a breast cancer prevalence rate of 1 in 22 in urban areas, the focus of the Foundation will be on early detection, through TBE, to improve the chances of survival and organ preservation. Initially, the Foundation will work with communities in and around Delhi NCR and then in other parts of the country as well.”

Shalini Khanna, Secy. & Director of National Association of Blind women has been working towards skilling blind women on life skills and employability for over 20 years. She was instrumental in getting Discovering Hands project to India with support from Bayer Crop Science. NAB got the trainers trained in Germany and has trained 14 visually impaired girls as Medical Tactile Examiners (MTEs) till now in pilot phase. The trained MTEs are currently running camps at various corporates, through local Rotary clubs and at various Resident Welfare Associations. They are also working as Interns at various hospitals. The high inherent sensory touch and focus that visually impaired women possess, is a huge factor to identify smallest of the abnormalities in breast. She aspires Discovering Hands should be able to substantially improve the early detection check from its current level and reaches out to more women in different cities in India, thus empowering more blind women of the country to be able to be independent in their lives with a new vocation of a kind.