In Russia, and to a lesser extent also in China, conflicting priorities between vaccinating the domestic population and exporting shots will remain acute throughout 2021 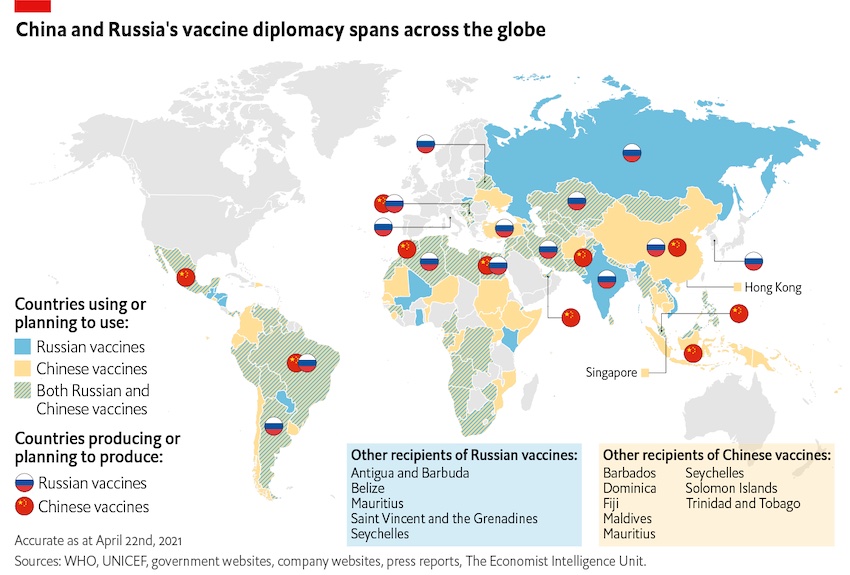 With vaccine diplomacy, Russia and China are gaining leverage on the cheap while fulfilling commercial goals. In most cases, they are not donating vaccines, but selling them; in China’s case, state-owned firms are competing with private ones for the supply of shots.

China and Russia are focusing their efforts on regions where they are courting favours from emerging countries (for instance Asia for China), or directly competing with western powers for influence (such as eastern Europe, and in particular the western Balkans, for both China and Russia), or in regions where they have only a limited presence so far (as is the case for Latin America, which is traditionally within America’s sphere of influence).

Vaccine diplomacy comes with risks. In Russia, and to a lesser extent also in China, conflicting priorities between vaccinating the domestic population and exporting shots will remain acute throughout 2021. To tackle this issue, both countries are opening additional factories (at home and abroad). However, it is unlikely that extra production lines will help to ease supply issues before the second half of 2021; setting up vaccine factories is technically challenging and it takes a minimum of six months before they are operational.

In the coming years, this will reinforce the global standing and leverage of Russia and China in emerging countries, helping both countries to gain influence and pursue their interests around the world. The longer term consequence of today’s vaccine diplomacy will be a further fragmentation of the global order.

Agathe Demarais, Director, Global Forecasting, Economist Intelligence Unit (EIU) and author of the report, says, “With vaccine diplomacy, Russia and China seek to leverage resentment against western countries, which have pre-booked more than half of the global supply of vaccines this year and are prioritising immunising their own populations.”

Demarais adds, “Vaccine diplomacy is not about sending shots as a one-off operation. Both Russia and China are establishing vaccine facilities across the world and training local workers from emerging countries, betting that such a strategy will boost their presence on the ground for decades to come.”