Ayushman Bharat to be a game-changer in providing UHC: Dr Harsh Vardhan 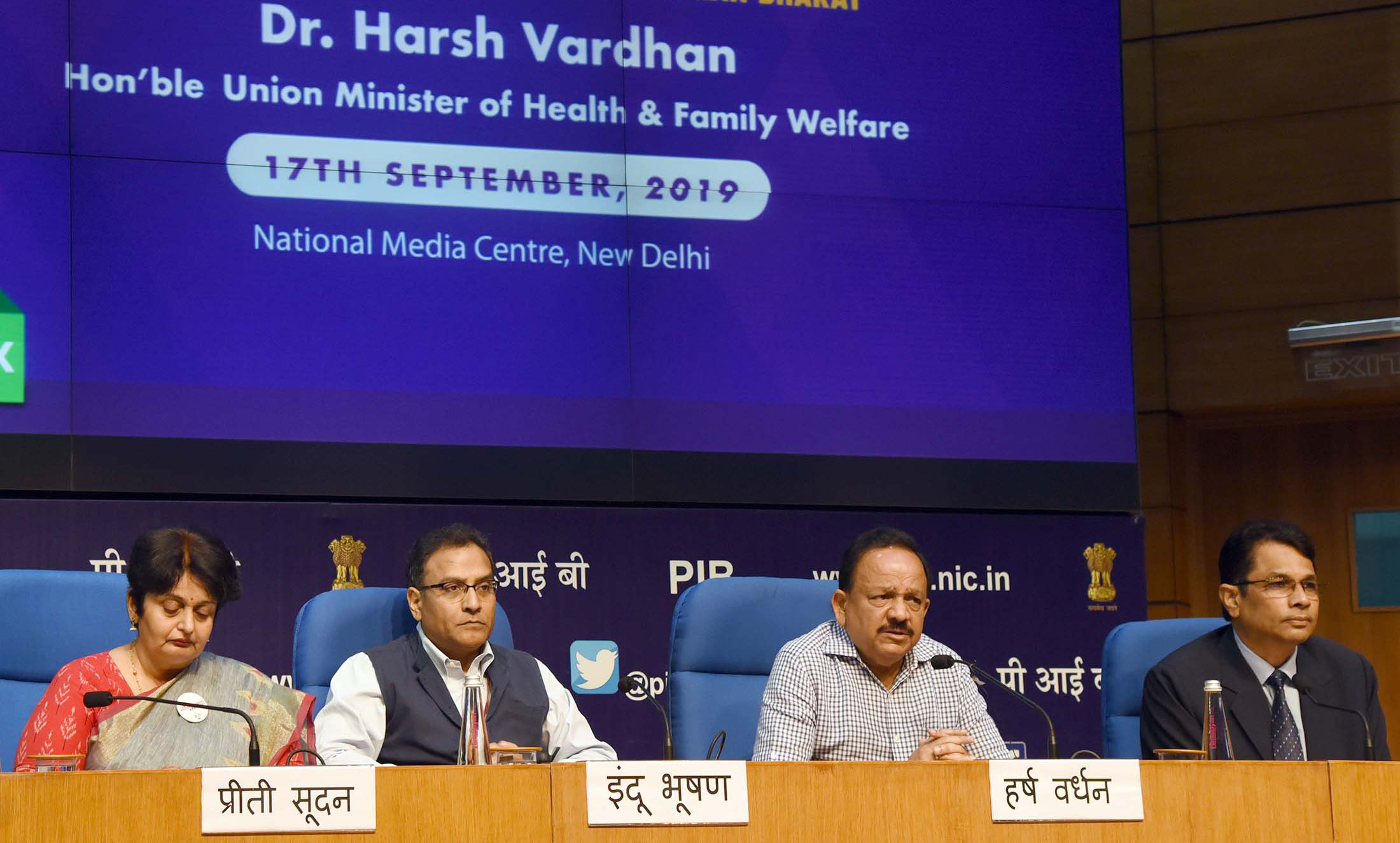 “The Ayushman Bharat journey which began on 14th April 2018 with the inaugural of a HWC at Jangla, a remote place in Chattisgarh, culminated in the launch of the second pillar of Ayushman Bharat- the Pradhan Mantri Jan Arogya Yojana (PMJAY) on 23 Sept, 2018 in Ranchi, Jharkhand.  I am happy to announce that in a short period of time, under the Ayushman Bharat scheme, more than 21,000 Health & Wellness Centres have become operational and about 47 lakh people have availed of treatments under its Pradhan Mantri Jan Arogya Yojana (AB-PMJAY) pillar”.

This was stated by Dr Harsh Vardhan, Union Minister of Health & Family Welfare, as he addressed the media announcing the launch of the Ayushman Bharat Pakhwara, a fortnight of enhancing awareness about the Yojana, the salient features of its twin pillars, and the benefits that can be availed of.

He added that “This year, as we complete one year of launch of AB-PMJAY, we are celebrating Ayushman Bharat Pakhwara (15th-30th September), a fortnight-long national campaign to enhance awareness around the preventive, promotive and curative aspects of health care, nutrition, yoga and healthy lifestyle through Ayushman Bharat and other related initiatives such as Poshan Abhiyaan and Swachhta Abhiyaan.

Dr Harsh Vardhan further stated that the flagship scheme of the Government, Ayushman Bharat is the vision of the Hon. Prime Minister Shri Narendra Modi ji to provide universal health care to the poor, needy and vulnerable sections of the country, who most need it. A path-breaking approach and a game-changer, it is probably the biggest public healthcare initiative in the world.”

While the 1.5 lakh Health & Wellness Centres (to be operationalised by Dec 2022) provide comprehensive primary care (CPHC) including preventive and promotive healthcare close to the communities, PMJAY covers 50 crore poor and vulnerable people in the country. It provides a health assurance cover of Rs. 5 lakh per family per year for secondary and tertiary care for serious and catastrophic illnesses, he elaborated. PM-JAY provides cashless and paperless access to services for the beneficiary at the point of service.

Through more than 21,000 AB-HWCs, the service area population (around 5 crore population empanelled to these centres) are getting out patient service besides the assured maternal and child healthcare services and management of common ailments through newly posted, trained and appropriately oriented Community Health Officers (CHOs). The operational AB-HWCs have a footfall of 1,70,63,522 patients till date.

“AB-HWCs will help to provide an enabling environment to increase the health seeking behaviour of the poor people; contribute towards reducing the out of pocket expenditure of the common people; create an assured system of continuum of care model (well-defined referral chain); help in increasing the trust of the people on the service provision by public healthcare facilities through health system strengthening and improvement; and enhance awareness to the people on preventive and promotive healthcare, yoga, healthy lifestyle and Eat Right & Eat SAFE etc.”, he added

Dr Harsh Vardhan also informed that tele-consultation services to the people with the qualified medical officers and specialists for cases referred from Sub Health centre level and PHC level respectively will be introduced shortly. A pilot is being done with eSanjeevani application of C-DAC, Mohali in Gujarat; after the due security audit, it will be rolled out in all functional AB-HWCs in phased manner.

The Health Minister further stated that since the launch of PMJAY on 23rd Sept last year by the Hon. Prime Minister, more than 47 lakh hospital treatments worth over Rs 7,500 crore have been carried out. Of the total amount utilised, 55% has been on tertiary procedures. In addition, more than 10 crore beneficiary cards have been issued. As on date, 32 States and Union Territories are implementing the PMJAY.

Minister further stated that under AB-PMJAY, 18,073 hospitals and health care providers have been empanelled across the country. Of this, 53% of the hospitals empanelled are private, especially multi-speciality, and 62% of the treatments have been in these private hospitals. A unique feature of PMJAY is its portability, which has helped the eligible poor and migrant workers to seek treatment outside their states. So far, there have been more than 40,000 portability cases, he informed.

Dr Harsh Vardhan added that “Through its vision and design, we have been able to bring on board nearly all States and Union Territories and get whole-hearted political and administrative support for it. This is a demonstration of our commitment to the highest ideals of cooperative federalism”.

The Health Minister added that recently the Governing Board of the National Health Authority decided to overhaul the existing health benefits packages and rationalize the cost of the packages to remove any aberrations.

“This will ensure wider private sector participation by empanelling more hospitals to improve access to hospitalization related care. We also approved an upgrade to our IT system to make it even more user-friendly, interoperable, secure and state-of-the-art, he stated. Initiatives for improving the quality of services were also endorsed”, Dr Harsh Vardhan said.

Dr Harsh Vardhan said that a strong fraud prevention, detection and control system is proving to be critical for PM-JAY, to ensure that frauds are largely prevented and even if they are attempted, they are quickly detected and strong action is taken. Due to the policy of zero tolerance towards corruption, 97 errant hospitals have been de-empanelled and penalties worth more than Rs.1.5 crore have been levied. Besides providing good healthcare services, the scheme is also progressing to achieve its vision of increasing employment in the health sector. He stated that an indigenous healthcare setup is coming up across India, and the infrastructure will develop further, especially in tier II and tier III towns. In the last one year, the scheme has started to create thousands of jobs across the healthcare sector in India, and many more will be created in the coming years.

The Union health Minister also stated that to mark the first year anniversary of PMJAY, the National Health Authority is organizing a 2-day national workshop, Arogya Manthan, on September 30th and October 1st, 2019. In the Arogya Manthan, all important stakeholders of PM-JAY will meet and discuss through day-long sessions and working groups to come up with implementable solutions to the challenges faced in the past year in the implementation of the scheme and to forge new understanding and pathways towards improving implementation.