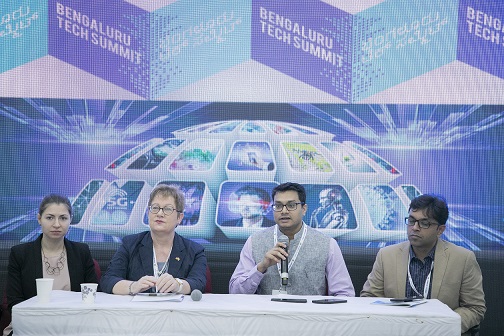 GIA MAP supports export expansion projects, by helping start-ups to enter new markets, establish international partnerships, and increase global sales. The program would have two parts, inbound and outbound. While ‘Inbound’ would provide soft landing provided in KTech Incubators for start-ups from other countries (GIA Partners), ‘Outbound’ would provide soft landing for Karnataka Startups in GIA countries. This would be a reciprocal agreement, where in start-up ecosystems of Karnataka and the GIA partner involved benefit mutually by sending and receiving start-ups.

Partnering with Berlin Senate-backed initiative Startup Asia Berlin (SUAB), the first cohort of German startups will explore the Indian market from 13th November to 3rd December 2019. Following this, Karnataka startups are expected to visit Berlin for a similar program early next year. The aim of GIAMAP is to forge lasting business relationships, and to support startups in achieving international growth.

Speaking at the occasion, Dr. E.V. Ramana Reddy, Additional Chief Secretary, Department of IT, BT and S&T said “We have embarked on creating a system of Global Innovation Alliances with innovation hubs of the world such as USA, UK, Isreal, France, Germany, etc. With startup promotion as one of the key focus areas for our government, we are pleased to launch GIAMAP to further engage with our international partners in this area. Bengaluru being the Startup Capital, would pave the way for international startups to access the Indian market via Bengaluru. ”

Ramona Pop, Berlin Senator for Economics, Energy and Public Enterprises, welcomed the new initiative stating, “Startups play a crucial role in the development of new technologies. In order to tackle the challenges of the 21st century we need innovators who think outside the box. We are happy to support this exchange between German and Indian startups. Finding solutions across borders will undoubtedly help both regions to thrive.”

In the pilot of the Market Access Programme, founders of German startups are invited to deep dive into Bangalore’s ecosystem for three weeks. Attending Bengaluru Tech Summit will offer the German participants unique opportunities to explore the Indian startup scene.

Shoba Purushothaman, MD of Hardskills’ Berlin hub said, “With 20% of the world’s workforce, India is a limitless market for Hardskills which solves a big challenge of Industry 4.0 – how to train entire workforces in the hard-to-teach behaviors and skills such critical thinking, agility, how to influence, collaborate and other modern business skills needed for high performance today. Hardskills is proud to be pioneer this bilateral pilot between Berlin and Bangalore.”

The programme is tailor-made for each startup, focusing on its unique needs and is free.  Following the pilot, similar startup exchanges are being planned with The Netherlands and Australia.