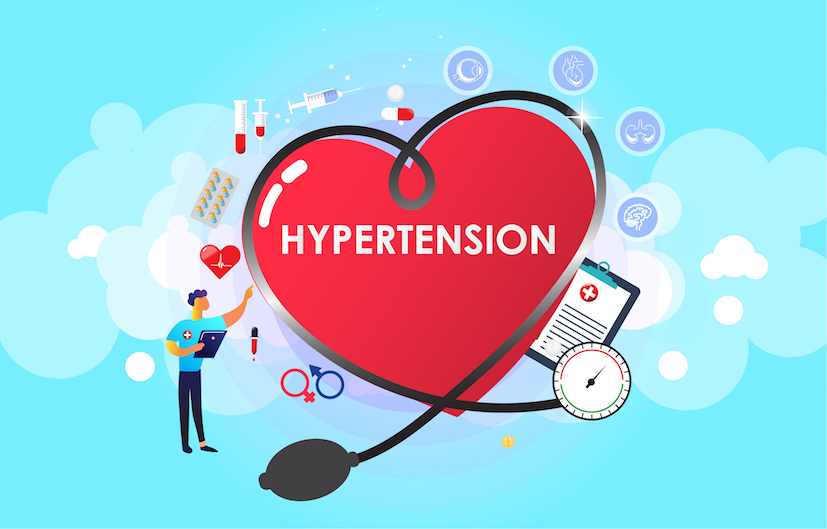 1.1 million deaths in India each year. What could have claimed such an inordinate number of lives? While one might immediately blame cancer or lung disease, hypertension or high blood pressure has affected nearly 234 million, only in India.

This condition occurs due to an increase in the blood pressure applied on the walls of the arteries. Although there are no exact causes of hypertension, a few factors highly responsible for this condition include obesity, stress, old age, genetics etc. Modernization has imbibed in us a lifestyle of less exercise, smoking and unhealthy eating habits which could lead to higher instances of obesity. This has greatly augmented hypertension, globally, stimulating the research of various drugs to help combat this life threatening disease.

Despite a great prevalence of this disease, in India, only about 10-20% of adults are diagnosed and are receiving treatment to reduce the risks that are brought by hypertension. The major causes for this are a lack of awareness and fewer screening facilities.

According to research conducted in large cities and rural areas, - the prevalence of awareness of hypertension is only in a quarter of rural and two-fifths of urban Indians, and only a quarter and a third of those identified in rural and urban India receive treatment for it.

Moreover, a large percentage of adults disregard the instructions given or are not advised correctly. This could be due to a number of reasons, the most common being an increase in the price of medicine, which discourages people from tending to this disease. However, geriatricians have estimated that developing countries like those in Asia and Africa will face an increase in the number of patients with this condition.

This would lead to higher production of these drugs which could decrease their price drastically. Thus more will be encouraged to seek help. Being asymptomatic, hypertension’s effects could manifest without one realising, and ultimately cause strokes, heart disease and even death. Thus negligence by patients has to be curbed through more screening facilities as well as the development and sale of antihypertension drugs.

In terms of medication, monotherapy, where a patient is administered a single drug, is the most common method used while treating mild hypertension. Containing substances such as calcium blockers, ACE or angiotensin-converting-enzyme inhibitors, vasodilators, diuretics, beta-adrenergic blockers, these drugs are effective while lowering any tension and circumventing strokes and cardiovascular diseases.

It is estimated that amlodipine is normally used by most patients. This drug falls under the class of CCBs, or calcium channel blockers. In an attempt to lessen the pressure exerted on the arteries, they allow them to dilate. Extended periods of use and consistent blood pressure with smaller doses make this type of medicine popular and extremely effective.

Apart from these, beta blockers including atenolol and carvedilol can be prescribed. By preventing norepinephrine and epinephrine (hormones produced by the body), these drugs are able to curb their effects, resulting in a lower heart rate and less pressure. Certain risks associated with this drug make it more likely to be prescribed to younger patients.

Furthermore, those suffering from other ailments such as diabetes or heart disease are advised to take ACE inhibitors. Through the inhibition of angiotensin II, a protein that promotes the contraction of the arteries, these drugs are able to reduce the pressure endured by circulatory system.

Despite the vast array of drug treatments available, on taking the drug, nearly 30% of patients experience no, or little change in their blood pressure. Thus scientists across the world have explored new medicines, ones that no longer directly target the arteries.

By ingesting a drug called firibastat, a pathway in the brain is impeded from producing angiotensin III. Since this protein proliferates the activity of neurons which cause constriction as well as hinder the heart’s ability to change the strength at which it pumps blood, this drug has had many successful trials in France and USA.

Moreover, scientists have observed that the severity with which it affects the body changes with the amount of abnormalities in blood pressure. Receiving reinforcement due to its positive results even in otherwise unaffected patients, this drug moved into further testing, and will hopefully change the course of treatment of this precarious condition.

While scientists have been working on promising drugs, production during the recent COVID-19 pandemic has seized. India, being one of the largest suppliers of antihypertensive drugs in the world, needs to import about 70% of the raw materials from China.

Bans on trade and shutdown of factories could lead to a shortage of these drugs in the future. The seriousness and prevalence of this disease accompanied with fewer drugs, could pose an immense threat to the adult population in India and around the world.

Due to numerous implications and risks associated with hypertension, the development and usage of drugs is vital, especially in developing countries. This will not only reduce the mortality rate, but also create a necessary awareness in people from all part of the world. Thus, on this  World Hypertension Day, ‘measure your blood pressure, control it, live longer.’