Going deeper into the skin

Psoriasis affects around 0.44% to 2.8% of the Indian population 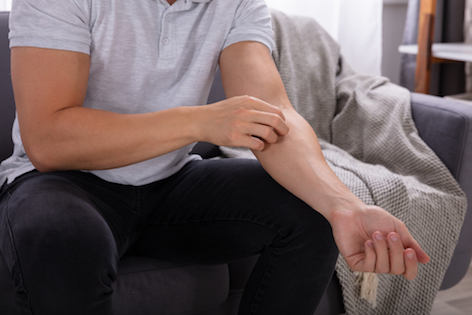 Even though we pride nature for creating a harmoniously functioning species - “humans”, it has left several millions across the world with its own defense system attacking itself, creating pain and discomfort while performing even the simplest of tasks. With autoimmune diseases tripling in the past few decades, the need for further research on these debilitating conditions is evident due to the lack of a cure and their recurring natures.

One such disease that affects around 0.44% to 2.8% of the Indian population is Psoriasis. Due to certain signals sent to the immune system, skin cells are considered to be harmful leading to an increase in the production of cells, thus resulting in red, flaky and “silvery scaled” areas on the skin. To make matters worse, about 94% of patients experience relapses, ranging from two weeks to nine years, never being fully relieved from this painful condition.

Even in the relatively mild winters in most parts of India, about 46% of patients experience a greater intensity of the patches due to the cold climate, while 43% seem to recover from the gentle heat of the summer season.

While being mainly prevalent in males as compared to females, symptoms usually occur in one’s thirties or forties. Thus these extreme occurrences have fueled Indian research on psoriasis to mainly study the effect of the human leukocyte antigen, which in most cases helps the body differentiate between the human cells and those of pathogens.

Furthermore, a greater importance has been given to comorbidities such as cardiovascular diseases and metabolic syndrome, which are factors that heighten the risk to the heart, mostly present in the the Indian society

Genetic composition, with environmental factors, creates a need for a well structured and personalized treatment plan to help relieve the stress and discomfort associated with psoriasis not only for the patients but for their families as well. While modern medicine has greatly reformed the treatment, many physicians, mainly in the rural parts of India, advocate for ayurvedic and siddha influenced medical treatments  such as mixtures of a variety of herbs and Wrightia tinctoria oil, followed by deep massages.

However, more research in this field has proved that this form of treatment could worsen the condition in most patients, especially in those prone to chronic recurrences, the most commonly experienced type of psoriasis in India.Thus patients are more often prescribed drugs including etanercept, infliximab,  itolizumab and secukinumab due to promising results in terms of alleviating symptoms over a long period of time. These drugs fall under the category of biologics and are recommended when a patient fails to respond to phototherapy or has reached a limit to the safe exposure to ultraviolet radiation.

More widely used in past few years, they help treat cases where psoriasis is relatively severe. By binding with those molecules and cells that increase inflammation and aid the maturation of T cells, these drugs are proven to be more effective in Indian patients.

Glenmark, based in Mumbai, was responsible for developing and releasing the first oral medicine for psoriasis in India. Prescribed to patients in a moderate or extreme condition, Apremilast or Aprezo proves to be safer and more effective without the need for patients to receive medical support while taking the drug.

Alzumab, a revolutionsing drug, has recently been released into the pharmaceutical market by Biocon, based in Bengaluru. By being injected rather than consumed, it allows patients to take fewer doses over a long period of time. Proving to be 50% cheaper than more commonly used drugs, Alzumab serves to be an effective method of decreasing treatment cost, thus making it more accessible for the public.

Making a mark in the treatment of psoriasis, Cadilla, based in Ahmedabad, has introduced several new drugs into the market. This includes Fluocinonide cream which recently received approval for its sale by the USFDA. Having anti-inflammatory uses, this cream could be used to treat numerous skin diseases such as eczema, dermatitis and psoriasis. By partnering with Lipidor, based in Stockholm, these companies are developing a new drug, APK-02, to be released by 2022. Going into the third phase of testing this year, the drug has shown positive results on multiple patients with differing skin types in India.

Psoriasis, a disease that has prevailed since the 19th century, has only recently been stressed on by Indian research companies in their effort to combat this autoimmune disease. New medicines move to replace the older, more traditional techniques, proving to be more effective and affordable for the general public. With no cure, one can only hope to lessen the symptoms and prevent relapses, thus allowing for a better quality of life and decreased economic burden.