Common indications for THR in Indian patients include Osteonecrosis (death of bone tissue) of the Femoral Bead (the ball), Osteoarthritis, and hip fractures among others. 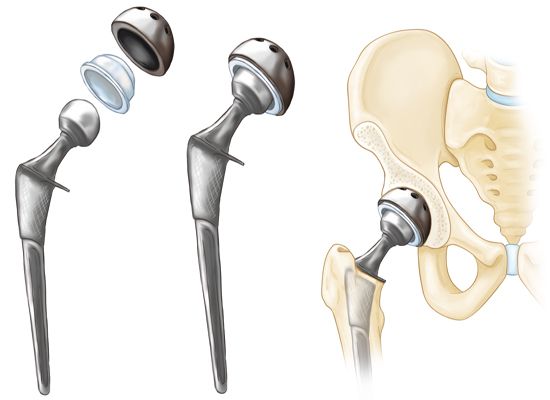 Total Hip Replacement (THR) has been described as the operation of the century (Learmonth et al, Lancet 2007) as it has completely transformed the management of elderly patients suffering from hip arthritis. The hip consists of ball and socket joint; THR involves replacing both the ball as well as the socket with an artificial joint. Common indications for THR in Indian patients include Osteonecrosis (death of bone tissue) of the Femoral Bead (the ball), Osteoarthritis, and hip fractures among others. Outcomes after THR are significantly influenced by the surgical approach, implants, and rehabilitation protocol; all of which have seen tremendous advancements over the last couple of decades.

SURGICAL APPROACH: Traditionally, the hip joint was approached either from the side (lateral approaches) or from the rear (posterior approaches) for performing a THR. The classical versions of both these approaches involved detaching some muscles around the hip joint which affected postoperative results and recovery. While the posterior approaches increased the risk of hip dislocation, lateral approaches often resulted in postoperative limp. In order to overcome these problems and improve outcomes, several other approaches have been explored. A special mention must be made of two minimally invasive approaches viz. the Mini Posterior Approach (mPA) and the Direct Anterior Approach (DAA) which is currently very popular.

The mPA like the classical approach, enters the hip from the rear. However, it has the advantage of a smaller surgical incision and lesser muscle damage, as compared to the standard approach. There is evidence to show that it results in lesser postoperative pain, early recovery and fewer complications.

In the DAA, the hip is approached from the front. This minimally invasive approach is muscle sparing and has the purported advantages of lesser pain, rapid recovery and reduced dislocation risk.

IMPLANTS: Implants play a vital role in the longevity of a hip replacement. Often, implant failure is due to the artificial head wearing out the socket from repetitive motion and loading. Latest bearings like ceramic-on-ceramic and ceramic-on-polyethylene have significantly greater resistance to wear compared to the standard metal-on-polyethylene bearings. They are particularly useful in younger patients, where a longer lasting implant is highly desirable. Another mechanism adversely affecting implant longevity is failure of fixation between the implant and the bone. Based on the method of fixation, THR can be cemented or un-cemented. Superior implant designs, specialized surfaces and bioactive coatings like Hydroxyapatite have led to enhanced fixation of un-cemented implants to the bone. Similarly, fourth generation cementing techniques have helped to optimise fixation of cemented artificial joints to the bone.

Complex or Revision (re-do) THR cases are often associated with bone defects which can be particularly challenging, and were often fraught with sub-optimal outcomes. Availability of anatomically shaped augments and buttresses have simplified the management of bone defects and significantly improved outcomes. Also, advanced materials like Trabecular Metal (Tantalum) which have superior fixation characteristics, especially against weak bone, have made it easier to tackle difficult surgical situations.

The size of the artificial ball (head) influences hip stability and Range of Movements (ROM) after THR. Large heads which provide greater stability against dislocation and enhanced hip ROM have resulted in substantially superior function, especially in younger patients. Along the same lines, Dual Mobility Liners have helped tackle the dreaded complication of dislocation especially in high risk patients. In short, advancements in bioengineering have given us high-class implants with exceptional longevity.

Traditionally, THR patients were advised to follow hip precautions like not bending forwards beyond 90° or crossing their legs in order to avoid hip dislocation for the rest of their life. However, with Minimally Invasive Surgery and superior implants, hip precautions are generally not required beyond 3 months, allowing patients to do more. Advances in surgical approach, implants and rehabilitation protocols over the years have revolutionised the results of THR making it one of the most successful reconstructive operations in orthopaedic history!