Healthcare IT registers highest VC funding ever in Q1

Healthcare IT registers huge VC funding ever in Q1 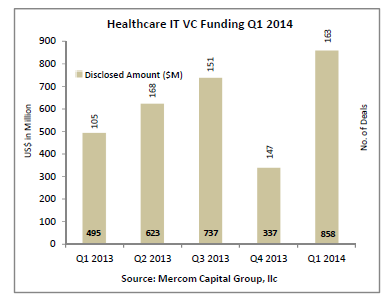 Mercom Capital Group, llc, a global communications and consulting firm has released its report on funding and mergers and acquisitions (M&A) activity in the Healthcare Information Technology (IT) sector for the first quarter of 2014. Mercom's comprehensive report looks at deals of all sizes in Healthcare IT across the globe.

"Funding into the Healthcare IT sector continues at an astonishing pace. Venture capital funding in Healthcare IT has reached almost $5 billion in about 1,000 deals since 2010," commented Raj Prabhu, CEO and Co-Founder of Mercom Capital Group.

Healthcare practice-focused technology companies received half of all VC investments in the first quarter of 2014, with $460 million in 60 deals. Areas that received the most funding under this category were Practice Management with $124 million in eight deals, Health Information Exchange with $78 million in two deals, and Data Analytics with $43 million in seven deals.

U.S.-based Healthcare IT companies accounted for 87 percent of all deals. However, we are seeing more Healthcare IT activity globally, with 15 other countries recording at least one funding deal.

Within the United States, California continued to be the most active state accounting for 42 deals, followed by New York with 13, Maryland with 10, Massachusetts with nine, and Florida with six. Among cities, San Francisco led with 13 deals followed closely by New York with 11. In terms of dollars, Tampa led with $78 million, followed by San Luis Obispo with $50 million and New York with $44 million.

Mergers and acquisitions (M&A) activity in the Healthcare IT sector was at its highest level, totaling 53 transactions, only six of which were disclosed for a combined total of $4.7 billion, compared to 44 transactions in Q4 2013. Health Information Management companies saw the most M&A activity this quarter with 18 transactions, followed by Service Providers with 13, and Mobile Health companies with eight.

Announced debt and public market financing in Healthcare IT amounted to $343 million in six deals in Q1 2014, compared to $36 million in seven deals in Q4 2013.

Total corporate funding in the Healthcare IT sector, including VC, accelerator/incubator, debt, and public market financing in Q1 2014 came in at $1.2 billion.

There were a total of 464 companies and investors mentioned in this report.