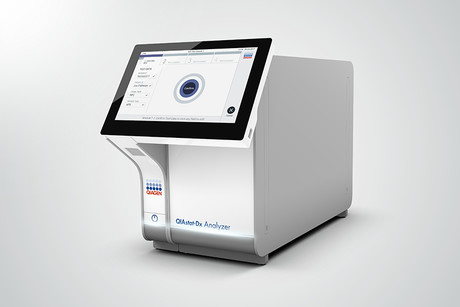 QIAGEN N.V. has announced the U.S. launch of its QIAstat-Dx syndromic testing system after receiving 510(k) clearance by the U.S. Food and Drug Administration (FDA), along with the multiplex QIAstat-Dx® Respiratory Panel for simultaneous qualitative detection and identification of multiple respiratory viral and bacterial pathogens.

QIAstat-Dx (formerly Stat-Dx DiagCORE®) represents the next-generation in multiplex molecular diagnostic systems that enables fast, cost-effective and flexible syndromic testing with novel Sample to Insight solutions powered by QIAGEN chemistries. The system, based on the proprietary DiagCORE® technology, received CE-IVD marking in January 2018 and already has a significant installed base.

QIAstat-Dx is being launched in the U.S. with a comprehensive respiratory panel that detects more than 20 pathogens. The panel is the first test in a deep and broad pipeline of planned assays for QIAstat-Dx in the U.S., with plans to launch a gastrointestinal panel later in 2019. With the ability to multiplex as high as 48 targets, a deep pipeline is planned that will span infectious diseases, oncology, companion diagnostics and other disease areas.