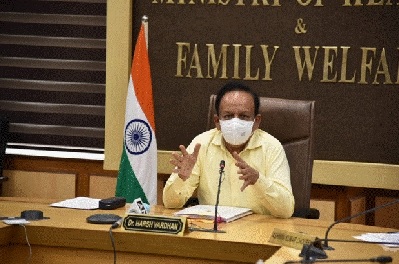 Dr Harsh Vardhan, Minister of Health & Family Welfare, chaired Tuberculosis (TB) Mukt Bharat meeting with various development partners of the Health Ministry through video conferencing. It was the 4th meeting chaired by the Union Health Minister for reviewing the progress in the fight against TB.

Speaking at the meeting, Dr Vardhan said that the media, especially Doordarshan, had played a crucial role in the eradication of polio in the country. On similar lines, journalists and media personalities should be made TB crusaders to create awareness amongst the people. He expressed the need to develop an institutionalised mechanism to share the best practices, experiences and ideas used in the fight against TB. He emphasised the importance of leadership and community involvement, proposing that religious leaders, leaders of auto unions etc. can be roped in to create awareness against TB. He said that there is a need to develop prototypes and clear strategies for five states having high TB caseload. These states are Uttar Pradesh, Madhya Pradesh, Meghalaya, Himachal Pradesh and Telangana.

Dr Vardhan expressed satisfaction over the efforts being made by various developmental partners and said that “together we are proceeding in the right direction”. He said that the fight against COVID and TB have to go hand in hand. He expressed hope that India will be able to eradicate TB by 2025 as envisaged by the Prime Minister if we put our mind, heart and soul together to eliminate TB.

Expressing satisfaction over the progress made by the country in the fight against TB, Minister of State, MoH&FW, Ashwini Kumar Choubey said that a Jan Andolan is required to eradicate TB. He underlined the need to have a grass root level visits in villages and slums, fully equipped with testing machines and other services to help people.

Rajesh Bhushan, Secretary, MoH&FW expressed the need to involve the Corporate sector and Community in the fight against TB. He suggested micro-planning, on the lines of COVID vaccination strategy for TB in states with high TB caseload. He further emphasised the need for active collaboration between Government and Developmental partners.