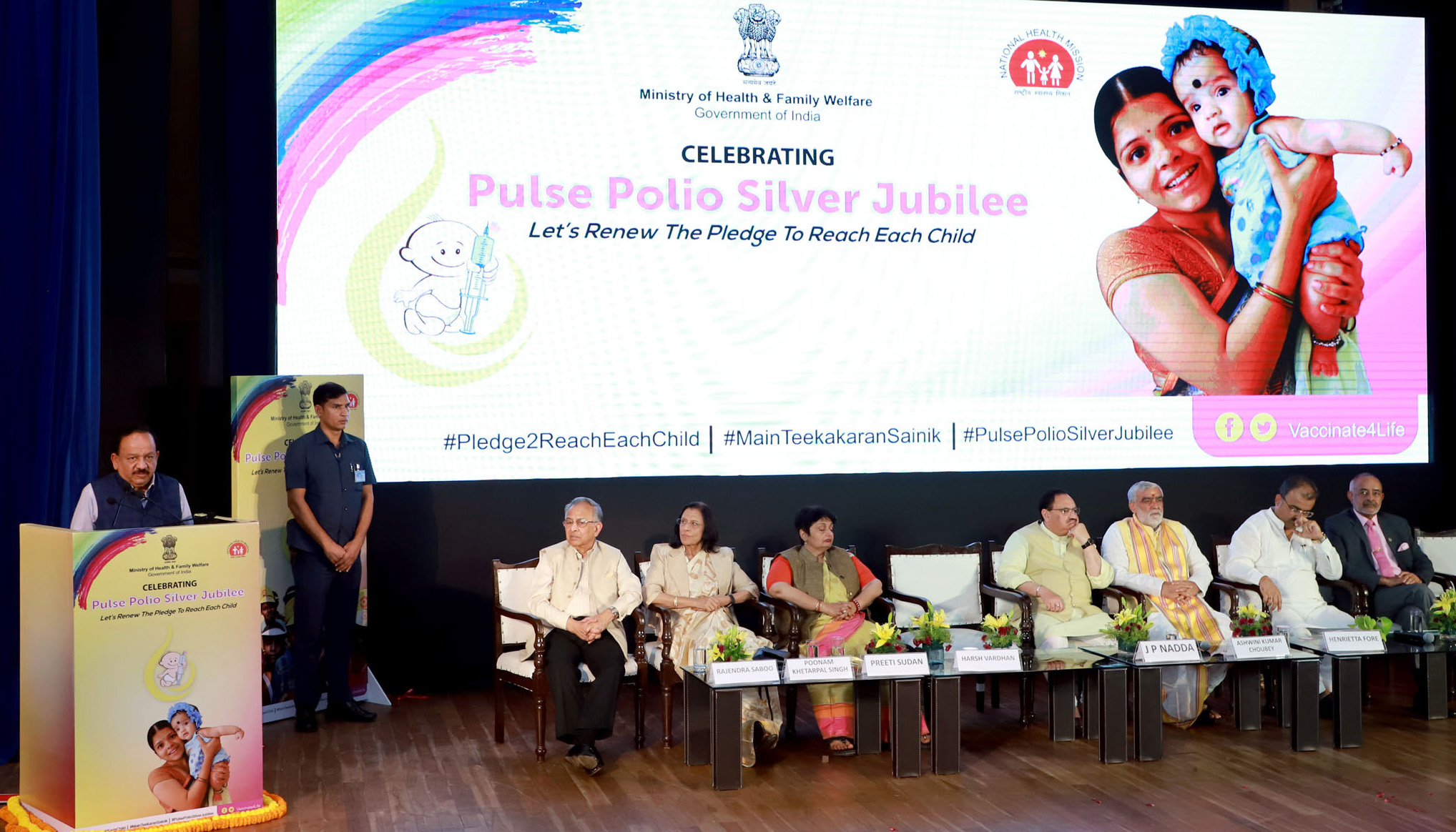 “As we mark and celebrate 25 years of the Pulse Polio Programme, it is now time to aim at 100% Full Immunization Coverage and ensure that not even one child or pregnant woman dies of Vaccine Preventable Diseases (VPDs)” said Dr Harsh Vardhan, Union Minister for Health & Family Welfare.

2nd Oct, 2019 marked 25 years of the first Pulse Polio campaign in Delhi, which was later adopted and implemented by Government of India as Pulse Polio Campaign across the country. The implementation of Polio Supplementary Immunization Activity played a key role in India’s attainment of polio-free status in 2014. This achievement was coined by the WHO as “one of the most significant achievements in public health,” and marked not just India but the entire South East Asia Region being declared polio-free.

J.P Nadda, former Health Minister was the Chief Guest of the event. He congratulated Dr Harsh Vardhan, calling him the Chief Architect of the Polio Programme and commended the Health Ministry for the internationally successful and applauded Programme.

Nadda said “As the health systems are robust and surveillance system of the country is very strong, I am very confident that Dr. Harsh Vardhan and his Ministry will achieve the full immunization coverage targets. The PHCs are being converted into Health & Wellness Centres (HWCs), which will ensure that in next 20 years the disease burden in the country is definitely going to decrease. I wish the Intensified Mission Indradhanush 2.0 all the very best”.

Ashwini Kumar Choubey, Minister of State for Health and Family Welfare congratulated Dr Harsh Vardhan calling him ‘Polio Senapati’ and his entire team and other stakeholders for their tremendous efforts to eliminate polio from the country.

Nadda encouraged all the health sector participants by telling them that their work and efforts do not show immediate results but it is these two drops and vaccinations that build a strong and healthy citizen in the long run, so they should continue working with same zeal and rigour to achieve Prime Minister’s dream of new and healthy India by 2022.

Dr Harsh Vardhan talked about the new initiatives being taken bythe Ministry of Health and Family Welfare to achieve the target of full immunization i.e. launch of Intensified Mission Indradhanush (IMI) 2.0 from December 2019 to March 2020, wherein several ministries are coming forward to join hands in taking the mission forward.The IMI 2.0 portal, launched at the event, has been designed to capture information on the blockwise target of children and pregnant women to be vaccinated during the IMI drive and also the coverage data during the rounds of activity. The data will be entered at the district level. This will help the Programme officers and administrators at the block, district, state and national level to have real time information on the progress of the campaign and also take timely action on slow progress in any particular area.

Dr Harsh Vardhan while reminiscing about the 25-year journey since the beginning of Pulse Polio Campaign, thanked all the partners and stakeholders of the Pulse Polio Programme.

He said “I laud the efforts of community and religious leaders who joined hands as advocates of this mission. I cheer for the efforts of the nation’s youth ambassadors, celebrities and sportsmen who supported in building the campaign. I salute the stalwarts of our country, our ASHA workers, ANMs, Anganwadi workers (AWW) who ensured all doors were knocked. I commend the uncompromised commitment and zeal of our state governments, civil society organizations, professional bodies like IMA, IAP, partners such as WHO, Rotary International and UNICEF and most importantly the support of citizens of our country”.

Union health Minister added that the level of commitment, accountability and ownership seen in this Programme was unprecedented and has not been witnessed elsewhere in the world. Dr Harsh Vardhan then said that while we are keeping our guards up for polio, Government has opted for a ‘game changing approach’ towards sustaining the gains of immunization, ensuring a healthy and prosperous future for our country. He added that learnings from polio campaign have further provided guidance for rollout of Mission Indradhanush and its intensified drive under the mentorship of our Prime Minister, Narendra Modi. “Our visionary leader, Narendra Modi ji has a dream of a healthy and robust India. It is our duty to contribute to this dream and ensure every child is vaccinated and grows up into a healthy citizen”.

Dr Harsh Vardhan concluded by calling upon all states, volunteers, partners, NGOs and other stakeholders to once again come forward and join hands to save every child from VPD, like they did for making India polio free.