The conference is bringing together thought-leaders from India and around the globe, providing a platform for researchers, medical and veterinary practitioners, public and private sector stakeholders, and policymakers 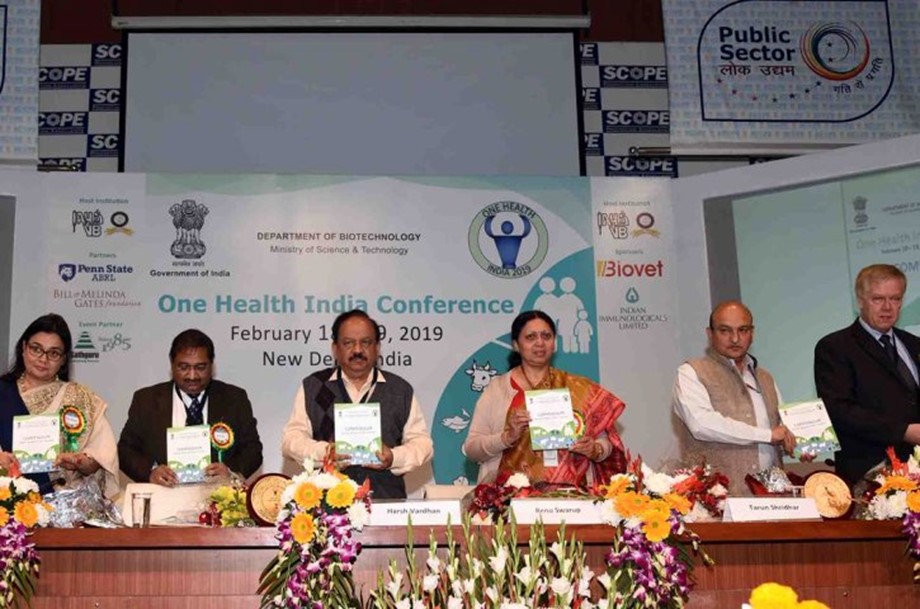 The conference plans to launch India's new One Health Initiative which is an intersectoral approach to tackling the most urgent health threats in India as well as in low and middle income countries across South and South East Asia and Sub-Saharan Africa.

Inaugurating the conference Dr. Harsh Vardhan, Union Science & Technology Minister said, “subject matter “One Health” dealing with human and animal health together in interaction with the environment in an integrated manner is an urgent need for protecting the global health and secure livelihoods. To address One Health there is a need to have a collaborative, multisectoral and trans disciplinary approach for designing and implementing programmes, policies and legislation supported by basic and applied research.”

India is among the top geographical hotspots where zoonotics diseases are major public health issue causing high burden of morbidity and mortality. High priority zoonotic diseases like Brucellosis have been emerged from Haryana to Goa, incidence and prevalence of occupational zoonotic disease like Anthrax have affected human health throughout. Similarly, Bovine tuberculosis (bTB) is a chronic disease of cattle that impacts productivity and represents a major public health threat and is considered endemic in India. Further, being among the highest bacterial disease burden in the world, antibiotics, therefore, have a critical role in limiting morbidity and morality and consequently Antimicrobial Resistance (AMR) has huge implications for India.

Speaking on Anti Microbial Resistance, Dr. Harsh Vardhan said that estimates of global antibiotic use in poultry, swine and cattle in 2010 indicate that India accounts for 3 percent of global consumption and is among the top consumers worldwide, along with China, the United States, Brazil and Germany.

The main objective of the conference is to formulate a roadmap for the response, preparedness, and management of current regional, national and global health challenges using a One Health collaborative approach. It is known that 60% of human diseases are of animal origin and many of them have developed resistance to major antibiotics in nature and share the ecosystems they live and infect animal and humans. Therefore, the conference deliberations are focused on identifying needs and opportunities and developing a strategy map to addressing major human and animal diseases of concern including Brucellosis, Tuberculosis, Anthrax, Antimicrobial Resistance (AMR), together with biosafety, biosecurity, burden of disease and inter-sectoral collaboration considerations.

The conference is bringing together thought-leaders from India and around the globe, providing a platform for researchers, medical and veterinary practitioners, public and private sector stakeholders, and policymakers to integrate knowledge and identify needs and opportunities to better coordinate activities and address major human, animal, and environmental health challenges.

The Bill & Melinda Gates Foundation, the Institute of Animal Health and Veterinary Biologicals (IAH&VB) of the Karnataka Veterinary and Animal Sciences University and The Pennsylvania State University, USA will be collaborating with the partners of the One Health Initiative.