Illuminations: The shadowy world of Radiology

Radiology scans allow doctors to peep inside people bodies virtually, and diagnose tumors and diseases as small as few millimeters. 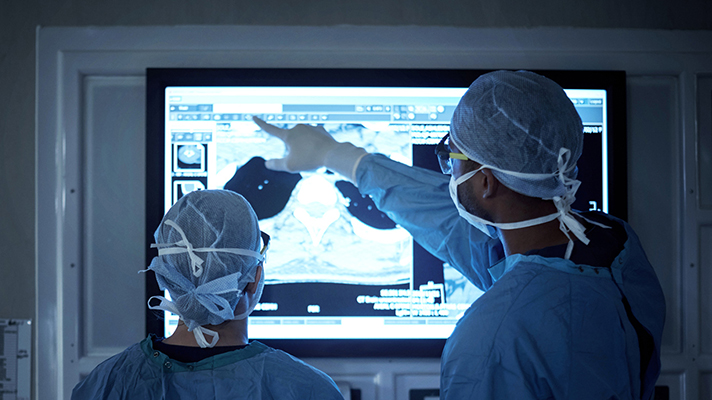 It was seemingly a routine day for me in my Radiology department with several scans piled up for reporting. But my flow was being regularly interrupted with a stream of clinical colleagues who wanted to see the scans of their patients. Each one wanting to know the various possible diagnoses that we had to offer for the patients. It was in the midst of this, that my surgeon colleague barged in and wondered if one of his young patients in the Emergency Room with a history of minor injury by a bicycle accident, would need a CT scan. He said that based on relatively innocuous preliminary findings, they were considering to discharge the patient, but for the fact that there was a niggling abdomen pain, he is going to order a CT scan. He also added for a good measure that chances of finding something on the scan are low.

At 6 pm, it was my phone call which interrupted the surgeon as he was driving back home. With an urgency in my tone, I told him that the CT scan of his young patient shows a complete pancreatic tear with bleeding and would warrant an urgent surgery. “Are you sure” was his immediate incredulous reaction. It is after some years of practice and managing many emergencies successfully, that surgeons start believing in the advice of their colleagues from Radiology. We were steadfast in our finding, hence the patient was promptly wheeled to the OR. Soon enough the findings were confirmed and the bleeding Pancreas were repaired. Danger averted, the patient went home healthy in a few days leaving everybody with a satisfied smile.

This is the success story that a Radiologist remembers and craves for, because not only did he diagnose an emergency condition when nobody was suspecting it, he also helped in the treatment plan which finally led to saving a life. This also exemplifies why modern diagnostics have become so important in todays’ clinical care. Imaging Technology often comes to the aid of clinicians in confirming their suspicion and also occasionally throwing up completely unsuspected diagnoses. It is not an overstatement to say that ‘innovations in imaging medicine is one of the most important advancement that has revolutionized modern medicine, and enabled more effective and efficient care that has saved countless lives’.

The various tools of imaging available to Radiologists include the humble X-rays, Sonography, CT Scans, MRI Scans, Catheter Angiographies and PET Scans. While X-rays continue to be the cost effective, and widely available imaging tool to look at Lungs, Bones etc., Sonography occupies a stellar position in imaging the foetuses. With Sonograms one can assess the development of the foetus and also diagnose developmental anomalies. Sonography also is the first imaging tool to look inside the abdomen and other soft body parts. The advantage being, it’s non-ionizing nature and also wide availability. The cross sectional modalities like CT, MRI and PET have revolutionized the diagnostic care enabling high resolution and precise imaging to diagnose smallest of tumors. Multi-slice CT scanners have become so fast that the entire body can be covered in a matter of 10 seconds. The most modern CT scanners even allow imaging of beating heart with exquisite anatomy of the Coronary Arteries and pick up small plaques that may cause a Heart Attack in the future. MRI places the patient in a magnetic field and small radio frequency pulses are sent to patients, body and the resulting changes in the hydrogen protons of the body are read and the images are generated. MRI is also non-ionizing and safe for all ages. The modern scanners have evolved into a stronger 3 Tesla strength with wider bore sizes and less noise for patient comfort. PET scanners are molecular imaging tools which take help of tumor metabolism to diagnose cancers.

A radiologist not only reports the scans but discusses the findings with the clinicians, often guides the surgeon on the pathological anatomy, enabling them to take decisions on the approach to surgery. Through interaction with the Radiologist, the surgeon prepares himself on what difficulties he is going to encounter even before opening up the patient. In the modern medicine oblivious to the patients, the treatment plan for the patient is often made in the Radiologists room. The Radiologist thus plays a role of consultant to the other consultants of the hospital.

Radiologists these days are not just content with diagnosing diseases, a modern Intervention Radiologist is using catheters and tubes for treating emergencies like a bleeding Aneurysm or blocking blood supply of tumors. They often open up arteries by placing stents and obtain tissue pieces from deep inside for Biopsies. Radiology has been around for over a century since Wilhelm Rontgen first discovered the strange new phenomenon he called “X-rays,” It has been evolving ever since and changing the way medicine is practiced.