Taking medicine to next level with virtual and augmented reality 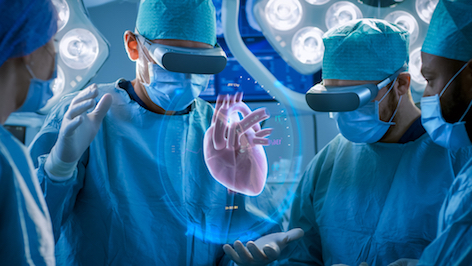 In the last 5 years, virtual reality (VR) and augmented reality (AR) have aroused the interest of investors and therefore the general public, particularly when Mark Zuckerberg bought Oculus for 2 billion dollars.

Currently, many other companies, such as Sony, Samsung, HTC, and Google, are investing heavily in virtual reality and augmented reality.

The study of virtual reality began in the field of computer graphics and has spread to different disciplines. Currently, video games supported by virtual reality tools are more widespread than in the past and represent valuable objects, work tools for neuroscientists, psychologists, biologists, and even other researchers.

The virtual reality market was estimated at $6.1 billion in 2020 and is expected to reach $20.9 billion by 2025; it is expected to grow at a CAGR of 27.9% from 2020 to 2025. The easy availability of affordable VR devices is the key factor driving the adoption of VR devices. The launch of VR devices by local companies in countries like China and India has helped make these devices more affordable and drive their widespread adoption.

On the other hand, AR is a newer technology than VR and shows an interdisciplinary framework of application, in which education and learning seem to be the most important area of research today.

The global AR market size was valued at $17.67 billion in 2020. It is expected to grow at a compound annual growth rate (CAGR) of 43.8% from 2021 to 2028. The increasing demand for remote support and collaboration from companies, workflow management, and optimization is expected to drive the growth of the market.

VR, the usage of immersive, computer-generated generation in medicine, is on the short music to giant use. In a few hospitals and clinics, your health practitioner can already prescribe a go-to-a VR experience to ease your ache or anxiety, or condition.

2020 observed that those women who used VR for 30 minutes at some point of exertions had much less ache and decrease coronary heart quotes than the ones now no longer the use of the generation.


AR is special and very useful in medicine because it combines virtual images with the real world, including real objects and people. This means that the surgeon, doctor or nurse can see things in front of them using AR that they might not otherwise like - veins running through your arm, a broken bone, a brain tumor, x-rays or medical records without drawing their attention away from you to look at another screen.

The regulatory bodies like FDA are starting to approve the usage of those technologies persevering to bring in the truth that a paradigm shift is underway with the capability for those technologies to have an effect on each factor of clinical care.