The laboratory, established at a cost of Rs. 8 crore is the only one in India for conducting basic and fundamental research in Homeopathy for viral diseases like influenza, Japanese encephalitis, dengue, chickunguniya and swine flu 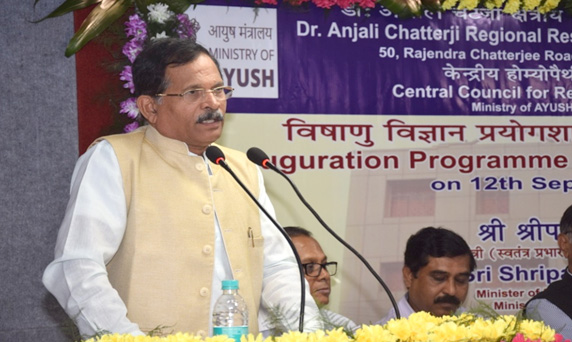 He said, “This laboratory has been established to develop new drugs and technologies in Homoeopathy to combat emerging challenges of viral diseases.”

In this context the Minister expressed his satisfaction of recognising this laboratory by the Calcutta University to undertake research work of the PhD students in Homoeopathy.

The laboratory, established at a cost of Rs. 8 crore is the only one in India for conducting basic and fundamental research in Homoeopathy for viral diseases like influenza, Japanese encephalitis, dengue, chickunguniya and swine flu. New drugs and technologies would also be developed here to combat emerging challenges of viral diseases.

The AYUSH Minister also appreciated efforts of the National Institute of Homoeopathy (NIH), Kolkata which is imparting higher education and training in homoeopathy under the Ministry of AYUSH and urged that both the institutes could forge an active collaboration on practical training to the students and research scholars in virus research, both in laboratory and in the field jointly.

He expressed happiness over Council’s initiatives of establishing a Centre of Excellence in Fundamental Research in Homoeopathy at IIEST, Howrah to undertake fundamental research studies in homoeopathy with an interdisciplinary approach.

This institute has undertaken several clinical research studies like autism, psoriasis, vitiligo, breast cancer, hypertension, migraine etc along with proving of new drugs in homoeopathy with their clinical validations. About 400 patients are being treated daily through OPD services and AYUSH outreach services being provided in villages too.