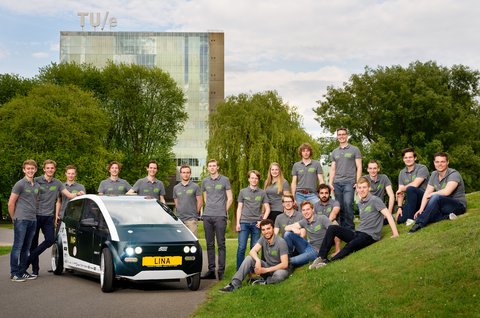 Students from Eindhoven University of Technology presented a car made of bio-composite. The chassis, bodywork and the interior of the car named ‘Lina’ are all made of natural materials.

The team wants to show that the car is not only energy-efficient but has also been produced with a view to sustainability. The super-efficient consumption of the city car is down to its low weight of just 300 kilograms. The car is certified by the Netherlands Vehicle Authority as roadworthy and is suitable to carry four people.

TU/ecomotive has used a combination of bio-composite and bio-plastic for the chassis. The honeycomb structure bio-plastic, or PLA, is used as the core material and is manufactured entirely from sugar beet. It is enveloped in bio-composite sheets that have been composed on the basis of flax, a plant that is also grown in the Netherlands. In terms of its strength-weight ratio, the bio-composite is comparable with the familiar fiberglass but manufactured in a sustainable way. The bodywork is also flax-based.

According to the press release, the car is electric-powered, and its lightweight materials (only 300 kilograms) means it uses up energy more slowly. On the flip side, more energy is used to produce the car – a potential turn-off for car manufacturers.

The next step for Lina and the design team is to try and obtain a license number for the car, which will enable her to be driven on public roads.

In 2011, designers Kenneth Cobonpue and Albrecht Birkner presented The Phoenix, a roadster made of bamboo and rattan. Designed to last roughly five years, The Phoenix never made it into mass production.