Dr.V. Mohan is the first Indian to win Harold Rifkin Award for distinguished international service in the cause of diabetes. 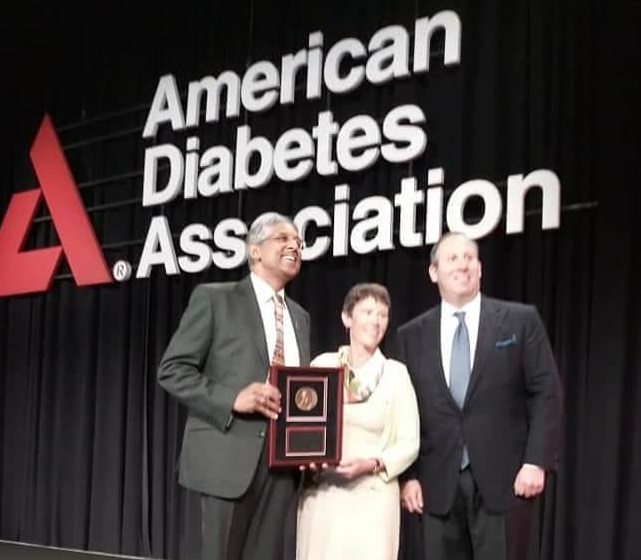 Dr. V. Mohan, Chairman and Chief of Diabetology at Dr. Mohan’s Diabetes Specialities Centre and President & Chief of Diabetes Research of the Madras Diabetes Research Foundation has been conferred the prestigious Harold Rifkin Distinguished International Service in the Cause of Diabetes Award by the American Diabetes Association (ADA). Dr. Mohan is the first Indian doctor to be conferred with this award by the American Diabetes Association ( ADA ).The award is dedicated in the memory of Dr. Harold Rifkin, an internationally recognized clinician, researcher and educator in diabetes.  It is one of the highest scientific achievement awards of American Diabetes Association given annually to an individual whose efforts have increased the awareness of the burden of diabetes worldwide to improve the care and lives of those with diabetes. The award recognizes Dr. Mohan’s outstanding service to the cause of diabetes in India and his pioneering work in the field of diabetes.

The award was conferred on Dr. Mohan during the 78th Scientific Sessions of the American Diabetes Association at Orlando during the National Scientific Achievement Awards Presentation Ceremony held on June 25th 2018 at WB4 Convention Center. Supported by a grant from the Rifkin Family, this award honours individuals who have demonstrated outstanding research, education, and care in diabetes performed from an international perspective with an international project.

On the occasion of receiving the award, Dr.V.Mohan commented “I thank the American Diabetes Association for this great honour and also a proud moment that it is the first time being bestowed to an Indian. I also thank my family and the entire team of Dr Mohan’s Diabetes Specialities Centre. The greatest accomplishment of course, is in setting up the chain of diabetes centres that we run. We currently have 42 branches of Dr Mohan’s Diabetes Specialities Centre across India and this serves approximately 430,000 people with diabetes both in urban as well as in rural India. The other important accomplishment I would say is capacity building or training people ,not just in the  speciality of diabetes, or just physicians and dialectologists but also nurses, ophthalmologists and many other technicians not just from India but from many other countries in  Africa and Asia. The methods of care and the low cost care which we have developed in India that is suitable for both rural and urban areas would be ideally suited not only for counties in and around India but also the developing countries in Asia, Africa and South America where they can learn a lot from the kind of rural work as well as the community work that we have carried out in India. “

Internationally renowned, Dr. Mohan has worked tirelessly to address the challenges of diabetes in India and developing countries. He has actively been involved in government health policy and advocacy programs related to diabetes, and he has served as President of the Research Society for the Study of Diabetes in India. Dr. Mohan’s comprehensive diabetes center boasts 41 branches with computerized clinical data on more than 4,21,000 patients.

“Thank you, Dr. Mohan, for your commitment to serving people with diabetes and to bringing systematic changes to improve populations. Congratulations on this accomplishment,” said the ADA’s 2018 President of Health Care and Education Felicia Hill-Briggs, PhD, ABPP. “Your efforts to ensure that the best diabetes care is available to people in India and other developing countries have improved millions of lives.”