Bonphul, the developer of OxyMax, the world's second and India's first oxygen optimizer—is upbeat about launching a product specifically targeted at hospitals 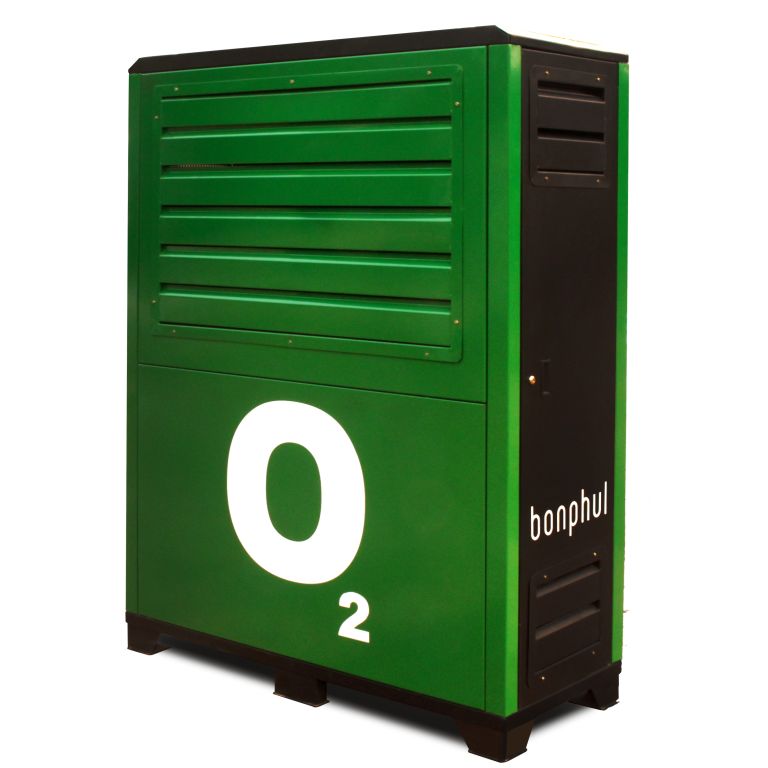 Most hospitals rely on cylinders for their supply of medical-grade oxygen to the operation theatre, few have installed oxygen plants. But a hospital is also a densely populated zone of people: doctors, nurses, staff, patients, attendants. This makes it a carbon dioxide cesspool.

Good quality air—what is called Mountain Fresh—is a mixture of about 21% oxygen, 78% nitrogen and 1% other gases. However, in most cities, the oxygen level in air is far lower; outdoors it would be around 18%, indoor even less. The US government's OSHA (Occupational Safety & Health Administration) defines as "oxygen deficient any atmosphere that contains less than 19.5% oxygen, and as oxygen enriched, any atmosphere that contains more than 22%." Bonphul OxyMax helps fill the oxygen-deficit.

Bonphul, the developer of OxyMax—the world's second and India's first oxygen optimizer—is upbeat about launching a product specifically targeted at hospitals and any large commercial space that is fully enclosed from all sides to meet the insulation demands of air-conditioning.

According to Narendra Bisht COO, Bonphul Air Products, “Bonphul OxyMax 50, is a roof-top product that harvests oxygen from outside air and pumps it into HVAC ducts for building-wide distribution. Each unit produces 50 LPM (litres per minute) of oxygen; however, depending upon the size of the area to be serviced, as also the density of occupancy, multiple units of Bonphul OxyMax 50 can be joined together to deliver the required volume of oxygen. Furthermore, Bonphul OxyMax 50 can also be integrated with building management systems (BMS) such that facility managers get an integrated view of the indoor climate and carry out the controls from a single digital dashboard.”

OxyMax is expected to help patients in hospitals and other healthcare facilities in two main ways.

Firstly, immunity strengthening. Oxygen plays an important role in maintaining a fully functioning immune system. When oxygen levels are high, the body’s immune system is strengthened. Emerging studies on how breathing in more oxygen could help in fighting cancer have been conducted by researchers at Northeastern University in the USA. Conversely, ‘if oxygen levels are low when infection strikes’, scientists at the University of Edinburgh found, ‘the immune system launches a massive overreaction. A fatal illness ensues even though the bacteria have been cleared from the body.’

Secondly, wound recovery. According to a study published in the British Journal of Dermatology, ‘Oxygen is a prerequisite for successful wound healing due to the increased demand for reparative processes such as cell proliferation, bacterial defence, angiogenesis (formation of new blood vessels) and collagen (essential proteins) synthesis. Even though the role of oxygen in wound healing is not yet completely understood, many experimental and clinical observations have shown wound healing to be impaired under hypoxia (a state when the body or a part of the body is denied sufficient oxygen supply at the tissue level).’ Oxygen, thus, has a determining function in every stages of the wound healing process, be it any type of wound including cuts, abrasions, bedsores, surgical wounds, diabetic ulcers etc.  It is intricately concerned with diverse biological processes which are all vitally important in the entire mechanism of repairing a wound. When the body does not have enough energy, it’s capacity for activities like cell reproduction, tissue repair and creation of new blood vessels are limited to a great extent.