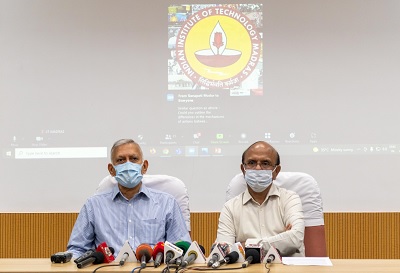 A recent peer-reviewed journal paper published in Nature Scientific Reports has shown the excellent efficacy of Indomethacin, a non-steroidal anti-inflammatory drug, as an antiviral agent in the treatment of mild and moderate COVID-19 patients.

The study conducted at Panimalar Medical College and Research Institute was led by Dr Rajan Ravichandran, an Adjunct Faculty at the Indian Institute of Technology (IIT) Madras and Director Nephrology at Madras Institute of Orthopaedics and Traumatology (MIOT) hospitals. The study was conceptualised and coordinated by Prof R Krishna Kumar, Institute professor, IIT Madras.

The Indian researchers are the first to show the efficacy of indomethacin through a randomised clinical trial on the scientific basis has been researched by Italian and US scientists. The entire study was funded by Kris Gopalakrishnan an alumnus of IIT Madras and Chairman, Axilor Ventures.