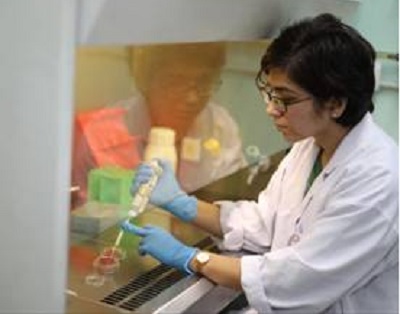 Dr Niti Kumar, Scientist, CSIR-Central Drug Research Institute (CDRI), Lucknow, a Swarnajayanti fellowship awardee of 2020-21, along with her research group, is trying to identify proteins which influence the shape-function of the single mitochondrion that the malaria parasite harbors as well as how it undergoes repair.

Understanding these processes will help decipher how the parasite adapts to environmental perturbations, mitigate drug-induced toxicity (phenotypic drug resistance), drive recurrence of infection after completion of treatment, and relapse from dormant stages.

Dr Niti's research group is using multi-pronged approaches to understand how the structurally-functionally diverged components of genome and proteome maintenance pathways give a survival advantage to the malaria parasite. It is very intriguing that despite the vulnerability to genotoxic and proteotoxic stress, the parasite maintains cellular homeostasis even under hostile conditions and can withstand immune surveillance mounted by mosquito vector and human host.

In addition to fundamental research, her group is also involved in the anti-malarial drug discovery programme and open-source drug discovery initiatives (such as Medicines for Malaria Venture).