The drug delivery device has been successfully tested with animals as per medical protocol. 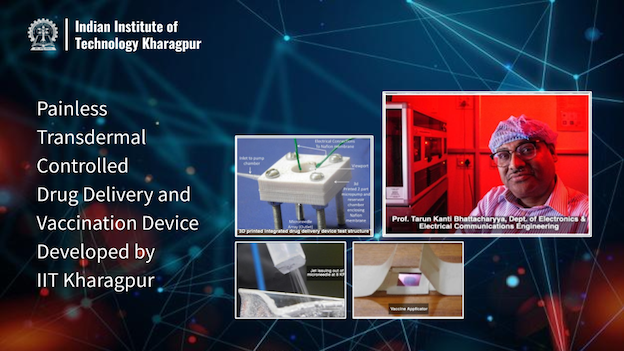 Researchers at the Dept. of Electronics & Electrical Communication Engineering, IIT Kharagpur (Kgp) have developed a micropump and microneedle which are integral parts of transdermal drug delivery systems capable of administering large and viscous drug molecules in a painless way.

Painless transdermal drug delivery has been a success story for decades in the USA and several other countries. In recent years, in order to expand its scope, the scientific community has been working towards developing microneedles with diameters smaller than a hair strand. The hollow microneedles operate by means of a pressurized and controlled micropump delivering the drug through the skin. The micropump pushes out the drug in the reservoir through the microneedle array. The microneedles are painless as they are too small to touch the nerves in the skin and induce pain reactions.

The innovation by IIT Kgp has not only reduced the diameter size of the microneedles but has also increased the strength so that they do not break while penetrating the skin.

Explaining the novelty of the innovation, lead researcher Prof. Tarun Kanti Bhattacharyya said, “We have fabricated high strength glassy carbon microneedles which can withstand the skin resistive forces. Added to this is our designing of the ionic polymer metal composite membrane based micropump which increases the flow rate of the drug molecules in a controlled and precise manner. We have further integrated this microneedle and micropump to achieve controlled drug delivery.”

This process further enhanced the quality, strength and biocompatibility of the product with eight-times increased hardness, 4.8 times increased mechanical stiffness (Young’s modulus), 418 times higher compressive strength and 363 times higher bending strength than the skin resistive forces. It showed a flow rate of 0.012 microlitre per second of deionized water at 8 kilopascal. The other segment of the device, the micropump, has been designed as a flat-walled nozzle diffuser made from ionic polymer metal composite membrane with gold coating. This micropump achieved a flow rate of 30 microlitre per minute at 5V square wave at 0.1Hz.

“The device would find extensive use in any form of transdermal medication. A typical use could be achieved in insulin delivery or medication for diseases of the lymphatic system, skin including some forms of cancer, or even COVID-19 vaccine” remarked Prof. Bhattacharyya. “The more we engage in multidisciplinary R&D, the better we would be able to produce customized microneedle based effective delivery systems,” he further added, hoping to transform the drug delivery system from the current syringe based one to a painless but effective experience for the patients.

The drug delivery device has been successfully tested with animals as per medical protocol. The researchers have also filed for a patent in India and published the research in IEEE and Nature journals. The research for this innovation was funded by the Ministry of Electronics and Information Technology (MEITY) and Dept. of Science of Technology, Govt. of India.