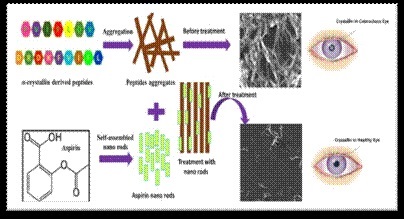 A team of scientists from Mohali based Institute of Nano Science & Technology (INST), an autonomous institute under the Department of Science & Technology, Government of India has developed nanorods from the nonsteroidal anti-inflammatory drug (NSAID) Aspirin, a popular medication used to reduce pain, fever, or inflammation and found it to be an effective non–invasive small molecule-based nanotherapeutics against cataract.

Their research published in the Journal of Materials Chemistry B could help prevent cataracts in an economical and less complicated way.

They have used the anti-aggregation ability of self-build aspirin nanorods as an effective non –invasive small molecule-based nanotherapeutics against cataract. Aspirin nanorods prevent the aggregation of crystallin protein and various peptides derived from its fragmentation, which play a crucial role in cataract formation.

As with aging and under various conditions, the lens protein crystallin aggregates to form opaque structures in the eye lens, which impairs vision and cause cataract.

The targeted disaggregation of the accumulated alpha-crystallin protein and crystallin derived peptide aggregates in aged and cataractous human lenses are considered as a viable therapeutic strategy for the prevention of cataract formation.