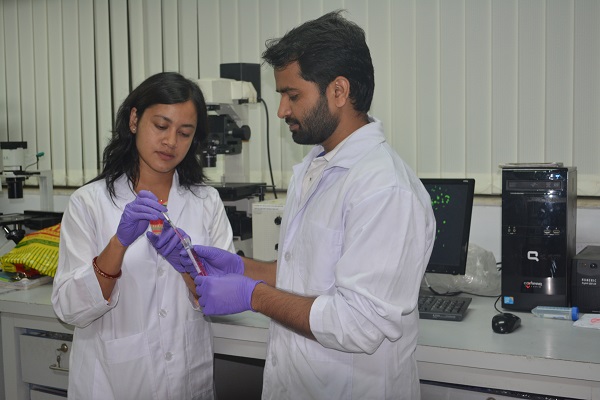 Indian Institute of Technology Guwahati (IIT-G) and Indian Institute of Science (IISc) Bangalore collaborate for an experiment to show how breast cancer cells spread through blood to other parts of the body. The multidisciplinary, multi-institutional team seeks to bridge this gap in understanding and works towards unravelling the mechanisms involved in the growth and spread of breast cancer.

The research led by Prof. Siddhartha Ghosh from IIT Guwahati, Prof. Gautam Biswas from IIT Guwahati, Dr. Mohit Kumar Jolly from IISc Bangalore and Dr. Amaresh Dalal from IIT Guwahati together with a research fellow Dr. Binita Nath and research scholars, Anil Bidkar and Vikash Kumar developed a PDMS based complex flow passage with an overall diameter of 184 micrometres (one micrometre = ten thousandth of a cm), with built-in blockages at certain locations that reduce the effective flow passages with a diameter of 7 micrometres. The complex flow passage mimics a capillary endothelial barrier followed by a capillary network. Their work has recently appeared in the Journal of Clinical Medicine, published from Switzerland.

Highlighting the importance of understanding how metastasis works, Prof. Siddhartha Sankar Ghosh, IIT Guwahati, said, “While breast cancer starts as a local disease, the cancer can grow and spread to other organs, in a process called “metastasis”, which is the most devastating attribute of the disease. We do not yet fully know the molecular and cellular mechanisms of breast cancer metastasis, and this hinders the development of treatment protocols that can prevent or treat cancer spread.”

“Our bodies are made up of billions of cells of various types and various types of cancers start from different types of cells”, added Prof. Ghosh, adding that breast cancer starts in epithelial cells.  Epithelial cells are found in skin and as lining for all organs inside the body as well as body parts such as breast and the insides of the chest cavity.

It has been known that cancer cells migrate from their point of origin to other parts of the body by transforming into other types of cells.  For example, the conversion of cancer-ridden breast epithelial cells into mesenchymal cells enables cell migration, invasion, and drug resistance, and consequently, contributes to cancer spread and disease aggressiveness. The cancer carrying mesenchymal cells can re-convert to epithelial cells at another site, causing secondary cancer.

Talking about the experimental model devised to study and bridge the gap in understanding this research, Prof. Gautam Biswas from IIT Guwahati, said, “While the epithelial-to-mesenchymal transition (EMT) is known to be an important factor in cancer spread, how the converted cells travel through the blood vessels and undergo reverse transition (mesenchymal to epithelial) at the secondary sites has hitherto not been completely understood. Our effort was to understand how the cells lose theirs EMT phenotype and revert back t0 epithelial format through a process termed MET.”

This structure was designed to mimic broken membranes through which cancer cells find way into the blood stream.  The PDMS passage was then connected to channels that mimicked network of blood vessels. The cells undergo Epithelial–Mesenchymal Transition. The EMT Cells then brought back through the mimicked endothelium into the tissue compartments. The reversion process is termed as MET. The movement of the cells through the various sections of the complex microchannel was captured using high speed camera, and the video-graphs showed the ways in which cancer spread from one site to another, through such narrow passages.

The team found that the EMT cells had enhanced migratory properties and retained 50% viability, even after migration through wells and constricted passages.  They also found that the cells collected at the channel outlet regained epithelial character.

Perhaps the most important observation that the team made was that the EMT cells were more resistant to drugs compared to the original epithelial cells and the reconverted epithelial cells.

“Our work is seminal in the area of cancer metastasis in that it explains the flow dynamics of the breast cancer cells and presents a vivid picture of EMT movement”, further added Prof. Ghosh.

Surveys have shown that breast cancer is the most prevalent form of cancer among Indian women, with 25.8 of 100000 women suffering from it.  It has been predicted that by 2020, there would be 18 lakh Indian women with breast cancer.  This research highlights the need for interdepartmental and inter-institutional studies, to understand cancer better and for the development of better screening programme and therapeutic protocols to manage this disease burden in future.