India has reduced its new malaria cases by one third: Health Minister

At the function, J P Nadda also launched the book “Addressing the challenge of controlling malaria across international border lines” and unveiled the Regional Action Plan (2017-2030) 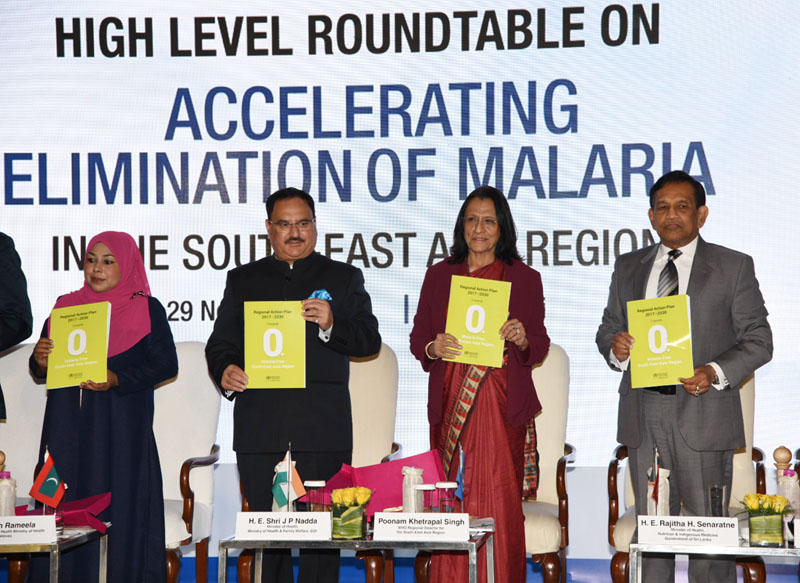 High Level Roundtable on “Accelerating the Elimination of Malaria in the South-East Asia Region” was recently held in New Delhi.

At the function, J P Nadda also launched the book “Addressing the challenge of controlling malaria across international border lines” and unveiled the Regional Action Plan (2017-2030).

The three-day ministerial roundtable on accelerating elimination of malaria in the South-East Asia region is in consonance with the United Nations Assembly Resolution on consolidation and accelerating efforts to control and eliminate malaria.

Speaking at the occasion J P Nadda said, “India has reduced its new malaria cases by one third, and even crossed the malaria mortality targets of 2020. With nearly ¾ of the share of the regional burden, India’s successes have significantly contributed to the reduction of the burden of malaria for the entire South-East Asia region.

“This success comes against the backdrop of the political leadership and support that health programs have received in India. The commitment to ensure health for every person in India comes from the highest office of the Government. It is Prime Minister Shri Narendra Modi ji’s vision to see health and development reach to the furthest corners of our country, and use the very latest innovations in technology and implementation science to achieve these outcomes,” the Union Health Minister elaborated”, he added.

Nadda stated that that the majority of malaria cases in the country come from the bordering districts, forest and tribal areas, while most of the remaining parts of the country remain malaria free. “Addressing malaria therefore, is not only an issue for India’s aspiration of achieving universal health coverage, but also achieve it with equity.

Reiterating the commitment to eliminate Malaria, health minister stated that the focus on the bordering districts and empowering local authorities with information, tools and knowledge will help malaria reductions in India and its neighbours. India as a hub for research and science would also support malaria implementation research, as well as capacity building in health research.