"We will build together such an India, which will be clean, healthy and fulfil the dream of self-rule" 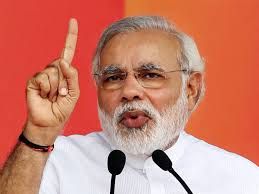 The Prime Minster, Shri Narendra Modi today addressed the nation from the ramparts of the Red Fort on the 71th Independence Day. Following are the highlights from his speech:

1. Greetings to my fellow Indians on Independence Day.

2. For the freedom and glory of the country, those who have contributed, those who suffered and sacrificed their lives, I salute all those noble souls, mothers and sisters on behalf of 125 crore people of the country from the ramparts of the Red Fort.

3. We remember the great women and men who worked hard for India's freedom.

4. People of India stand shoulder to shoulder with those affected in the wake of natural disasters in parts of the country & the death of children in the hospital.

6. The Quit India Movement was “Bharat Chhodo,” but the call today is “Bharat Jodo.”

7. We have to take the country ahead with the determination of creating a 'New India'.

9. In our nation, there is no one big or small...everybody is equal. Together we can bring a positive change in the nation.

10. We have to move forward for making a New India with the collective strength of 125 crore people without any discrimination of small and big people.

11. 1st January 2018 will not be an ordinary day- those born in this century will start turning 18. They are Bhagya Vidhatas of our nation.

12. We have to leave this 'Chalta Hai' attitude. We have to think of 'Badal Sakta Hai'- this attitude will help us as a nation.

13. The country has changed, is changing and can change. We have to move forward with this belief and commitment.

15. Our uniformed forces have achieved the pinnacle of sacrifice in fighting left-wing extremism, terrorism, infiltration and elements disturbing peace. The world had to recognise the strength of India and it clout in the surgical strike.

16. One rank, One Pension policy has boosted the morale of our security forces.

17. Those who have looted the nation and looted the poor are not able to sleep peacefully today.

18. No law was passed for those having Benami property for years. However after the recent passage of the Benami Act, within a short span of time, government has confiscated Benami property worth Rs. 800 crores when these things happen, common men feel that this country is for the honest people.

19. Today, we are celebrating the “festival of honesty”.

20. GST has shown the spirit of cooperative federalism. The nation has come together to support GST & the role of technology has also helped.

22. Good governance is about speed and simplification of processes.

23. India's stature in the world is rising. The world is with us in fighting the menace of terror. I thank all nations helping us doing so.

24. We have to work for the progress of Jammu and Kashmir.

25. There is no question of being soft of terrorism or terrorists.

26. Neither by bullet: nor by abuses but by hugging we can solve the problem of Kashmir.

27. Our fight against black money and corruption will continue. We are trying to bring transparency through technology.

28. There is no question of being soft on terrorism or terrorists.

29. People would be the driving force behind the establishment, rather than the other way around – Tantra se Lok nahin, Lok se tantra chalega.

30. New India will be the biggest strength of democracy.

31. Nature of job is changing with changing demand and changing technology.

32. We are nurturing our youngsters to be job creators and not job seekers.

33. I want to mention those women who have to suffer due to 'Triple Talaq'- I admire their courage. We are with them in their struggles.

34. India is about Shanti, Ekta and Sadbhavana. Casteism and communalism will not help us.

35. Violence in the name of 'Astha' is not something to be happy about, it will not be accepted in India.

36. The country is being run by peace, unity and harmony. It is our civilisation and culture to take everybody along.

37. We are taking the nation on a new track (of development) and are moving ahead with speed.

38. We are devoting significant attention to eastern India- Bihar, Assam, West Bengal, Odisha, Northeast. These parts have to grow further.

39. Our farmers have worked hard to ensure a Record foodgrain production.

40. Over 5.75 crore farmers have been covererd under Pradhan Mantri Fasal Beema Yojaana.

41. Under Pradhan Mantri Krishi Sinchayee Yojana, 30 projects have been completed while work is on for 50 more projects.

42. Under Pradhan Mantri Kisan Samapada Yojana we are providing handholding to the farmers from availing seeds to accessing the markets for their produce.

43. More than 14000 un-electrified villages have been electrified.

45. More than 8 crore youth have received loans without any guarantee.

46. We are fighting corruption - for the bright future of India and the wellbeing of our people.

47. Our fight against black money and corruption will continue and move forward and the loot in the country will not be allowed.

48. Our strive for a Corruption Free India has yielded results.

51. Post GST savings and efficiency in transportation sector has increased. Efficiency has gone up by 30 percent.

52. More money has come to the banks due to demonetization which will give impetus to the economy.

53. Our country has the world’s largest youth population. Today is the era of IT and let’s move ahead on the path of digital transaction.

54. Let us lead from front, promote digital economy and adopt the Bhim App.

56. It had been said in the old scriptures that if a work is not completed on time, one does not get the desired results.

57. For the Team India it is the right time to commit for a New India.

58. We shall build together an India, where the poor will have concrete houses with water and electricity connection.

59. We will build such an India, where the farmers will have a peaceful sleep without any worry. He will earn double than what he is earning today.

60. Our resolve is to build an India, which provides all the opportunities to the youth and women to fulfil their dreams.

61. Our resolve is to build such an India, free from terrorism, communalism and casteism.

62. We will build together an India, where there will be no place for nepotism and corruption.

63. We will build together such an India, which will be clean, healthy and fulfil the dream of self-rule (Swaraj).

64. We aspire to build a Divya and Bhavya Bharat.