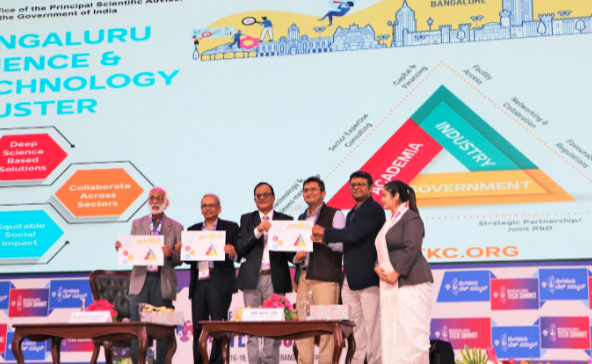 This effort was coordinated by the Indian Institute of Science (IISc) in partnership with Centre for Cellular and Molecular Platforms (C-CAMP).

A proposal for funding for BeST was submitted with Principal Investigator (PI) Prof. Govindan Rangarajan (Director, IISc) and co-PIs Prof. Ambarish Ghosh (Professor IISc) and Dr Taslimarif Saiyed (CEO, CCAMP). The funding was recently sanctioned by the Office of the Principal Scientific Adviser to the Government of India.

During the launch, Prof. Sood emphasised that Bengaluru has enormous technological potential and that Karnataka State is among the leaders in science and technology advancements. He anticipates that the cluster will succeed and pave the path for future success.

A science and technology cluster is a collaborative ecosystem in a city or a region, in which scientists, engineers, social scientists, and entrepreneurs working in academia, government labs, and industry identify and collaborate to solve some socially relevant problems. Science & Technology (S&T) Clusters are being established as formal umbrella structures for S&T organisations in various cities to work together more effectively while retaining their autonomy. On the recommendation of the Prime Minister's Science, Technology, and Innovation Advisory Council (PM-STIAC) to build an Atmanirbhar Bharat through S&T, the O/o PSA supports these initiatives.

The Bengaluru Science and Technology Cluster (BeST), the latest in this set of O/o PSA supported clusters, has identified Health & Wellness, Urban Life, and Futuristic Technologies as its core sectors and has set up teams to work on areas of One Health, Digital Health, Precision Agriculture, Urban Transportation, Monsoon & Climate Change, Quantum Technologies, Active Matter & Robotics and Jet Engine.

As Prof Sood explained, the BeST Cluster is envisaged as a platform of active collaboration for the entire R&D ecosystem in Bengaluru cutting across disciplines and mandates but retaining their individual autonomy. A Section 8 company is being set up to catalyse this collaboration as an independent body, provide organizational support and raise and manage resources.

The earlier S&T Clusters in this programme have been set up in Pune, Jodhpur, Delhi-NCR, Bhubaneshwar and Hyderabad.