An ideal oxygen grid for the country would work much like an electricity grid, with central generation (liquid medical oxygen), transmission (tankers and cylinders), storage (liquid and gaseous), and decentralized production (pressure swing adsorption generators and oxygen concentrators) 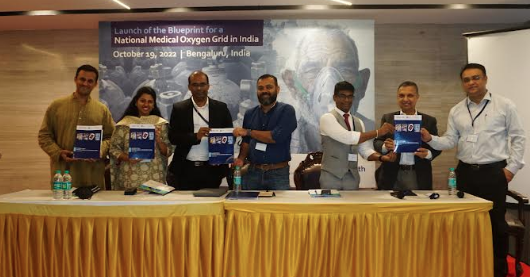 To support the goals of the Oxygen-for-India campaign, and with support from USAID-RISE, the Bill & Melinda Gates Foundation, and the Swasth Alliance, the One Health Trust (OHT) embarked on an effort to develop a national oxygen grid, that can ensure timely availability of medical oxygen which can save lives, including those of children suffering from respiratory ailments, pregnant women, patients with severe malaria, cardiovascular disease, and traumatic injuries.

The “Blueprint for a National Medical Oxygen Grid in India” was launched on October 19 in Bengaluru by D. Randeep IAS, Comissioner, Health and Family Welfare Services, Government of Karnataka and heralds the advent of self-reliance in the supply of medical oxygen throughout the country.

The report presents a comprehensive assessment of the current and future medical oxygen needs of India and the design and implementation of a National Medical Oxygen Grid (NMOG).

The report finds that the lack of utilization of medical oxygen, especially outside of major metros, meant that there was both a lack of supply as well as a lack of personnel trained to use medical oxygen.  It is vital to fix the problem and ensure that oxygen is widely available and used in the farthest corners of the country during normal times so that the country’s infrastructure is ready for any future crisis.

This report lays the groundwork for the design and implementation of the grid. It recommends a four-step approach for the design of the NMOG.  The first step is to model and plan exercises to forecast the demand that must be met. The second is to divide the demand into manageable distribution areas to ease distribution. The third step is to create a detailed supply-side assessment so that the demands forecasted in step 1 may be met. The final step is to design the grid network that would include detailed steady-state and exigency operational plans.