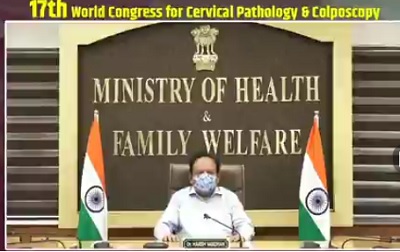 Dr Harsh Vardhan, Union Minister for Health and Family Welfare addressed an audience of eminent doctors, professors of medical science and stalwarts of medical fraternity specialising in cervical pathology and colposcopy through video conference at the inaugural session of the 17th World Congress for Cervical Pathology and Colposcopy.

The event organised by the Indian Society of Colposcopy and Cervical Pathology was inaugurated by the Vice President of India Venkaiah Naidu. Dr Vardhan congratulated the Indian Society of Colposcopy and Cervical Pathology for pioneering training in colposcopy and treatment of precancerous lesions of the cervix and for bringing the World Congress for the first time to Asia. The theme of the World Congress 'Eliminating Cervical Cancer: Call for Action' is aligned to the WHO call for Elimination of Cervical Cancer by 2030, he stated.

Speaking on the topic of cervical cancer, the Union Health Minister said, “It is the fourth most common cancer in women. It affects over half a million women across the world each year and kills a quarter of a million. Tragically, one woman dies of cervical cancer every two minutes, making it one of the greatest threats to women’s health. The sad part is that our women are suffering and dying even though when diagnosed cervical cancer is one of the most successfully treatable forms of cancer, as long as it is detected early and managed effectively. Cancers diagnosed in late stages can also be controlled with appropriate treatment and palliative care. With a comprehensive approach to prevent, screen and treat, cervical cancer can be eliminated as a public health problem within a generation.”

Dr Vardhan also highlighted the crucial role undertaken by India to stop cervical cancer heeding to WHO’s 2030 target. He said, "I can proudly state that India is one of the few developing countries that have formulated the national cancer control program. As a leader in Asia, in 2016, we have launched the operational guidelines for screening of common cancers - cervical, breast, oral and Cervical Cancer. India along with 194 other countries has collectively resolved to work together for the elimination of this major killer a goal which is achievable through 90 per cent HPV vaccination coverage, 70 per cent screening coverage and 90 per cent treatment for cervical precancer and cancer including access to palliative care.”

The Union Health Minister explained how the Government of India is offering the intervention to end cancer through the two wings of the Ayushman Bharat Programme.