Which can lead to research careers and knowledge-based economy 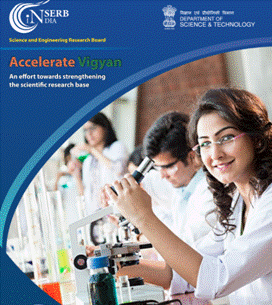 To provide a single platform for research internships, capacity building programs, and workshops across the country, the Science and Engineering Research Board (SERB), under the Department of Science and Technology, has launched a new scheme called ‘Accelerate Vigyan’ (AV).

You can get more information on this scheme from its web portal www.acceleratevigyan.gov.in. Straight off the block, AV has already called for applications under its ‘ABHYAAS’ component for the Winter Season.

The primary objective of this inter-ministerial scheme is to give more thrust on encouraging high-end scientific research and preparing scientific manpower, which can lead to research careers and knowledge-based economy.

Recognizing that all research has its base as development of quality and well-trained researchers, AV will initiate and strengthen mechanisms of identifying research potential, mentoring, training and hands-on workshop on a national scale.

“The vision is to expand the research base, with three broad goals, namely, consolidation / aggregation of all scientific programs, initiating high-end orientation workshops, and creating opportunities for research internships for those who do not have access to such resources / facilities,” said Dr Rajeev Mehajan, Advisor, SERB. The institution is also planning to launch an app for this in the coming two months.