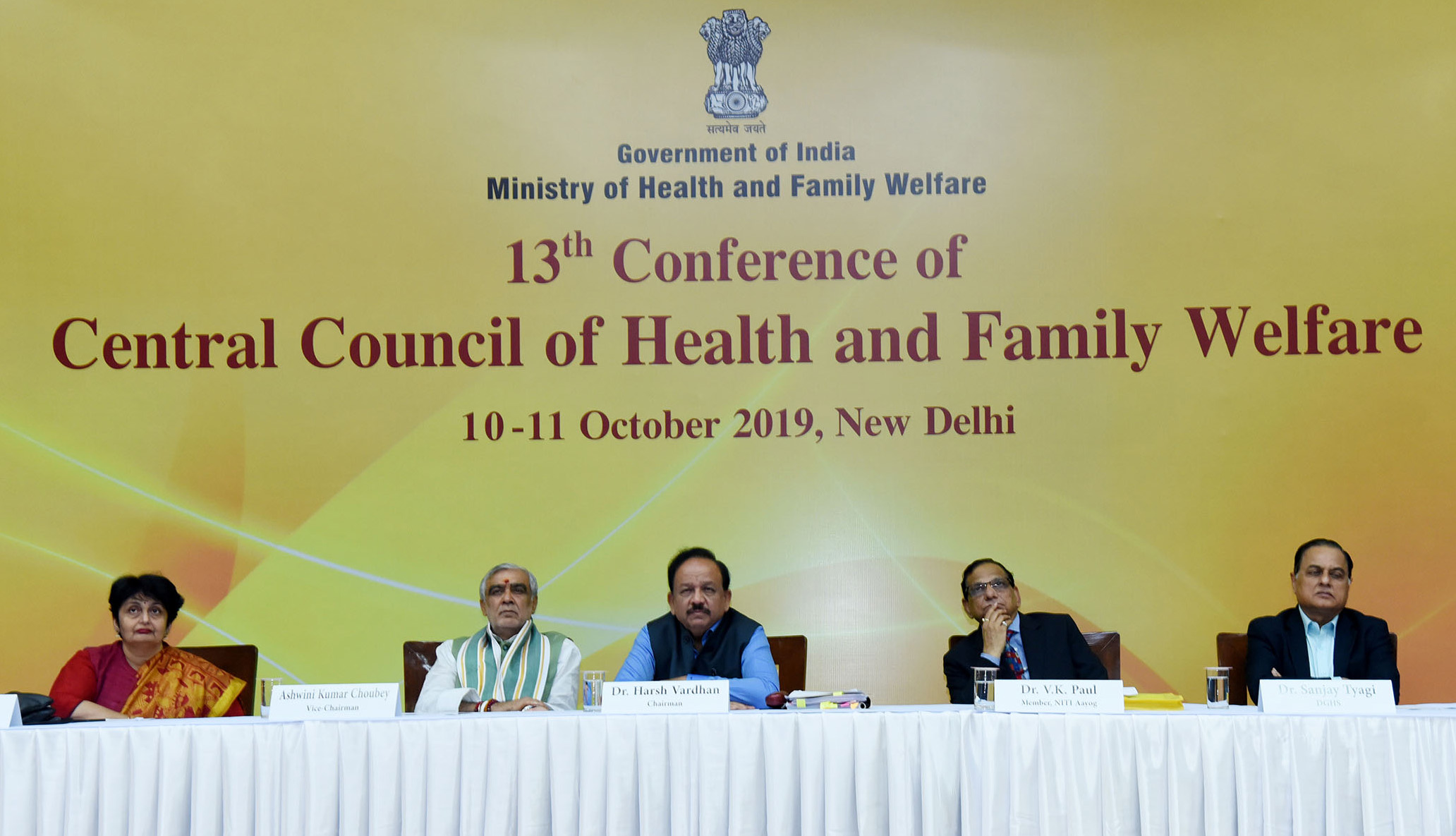 Urging the participating Health Ministers from States/UTsto increase healthcare spending to a minimum 8% of their State budget so as to meet the goals of healthcare spending of National Health Policy 2017- 2.5% of GDP by 2025, Union Minister for Health & Family Welfare Dr. Harsh Vardhan stated that “From the first CCHFW meeting to today, we together have achieved several health milestones, especially India being certified Polio-free. This has been possible because of our collaborative efforts. If all Health Ministers come together for a cause, no task can be impossible.” He was inaugurating the 13th Conference of the Central Council of Health and Family Welfare (CCHFW), in the presence of Ashwini Kumar Choubey, MoS (HFW), Dr V K Paul, Member (Health), Niti Aayog, Preeti Sudan, Secretary (HFW), and Health Ministers from 13 states, in New Delhi.

Speaking at the event, Dr Harsh Vardhan stated that the purpose of the CCHFW meeting is to build a consensus on the national health priorities i.e. Universal Health Coverage (UHC) through Ayushman Bharat, eliminating TB and other priority agenda such as strengthen medical infrastructure. This can be achieved by collective increase in healthcare spending by the States/UTs to meet the goals of healthcare spending of National Health Policy 2017- 2.5% of GDP by 2025. “This is the first time that a government is so committed to healthcare and health care is on the top agenda. This is clearly visible from the passionate address of our Prime Minister Shri. Narendra Modi ji at the recently concluded UN General Assembly where he stressed upon four pillars of healthcare, which included universal health coverage; mission mode interventions; quality and accessible affordable healthcare services; and also adequate infrastructure.  Dr Harsh Vardhan further stated “Health needs to become a social movement in every State & UT and the Eat Right and Fit India movements need to be taken up by States & UTs in a synergized manner, to ensure a healthy & robust India”. The Minister also urged the Health Minister of Uttar Pradesh, who is also the Finance Minister of the State, to increase the health budget of the State and set an example for the rest to emulate.

Speaking at the occasion, Preeti Sudan, Secretary (HFW) said that the health Ministry is dedicated to the cause of effective, affordable, quality and accessible healthcare. She added that the CCHFW is integral to achievement of health goals of the country, “Without the political leadership and commitment of the States & UTs, healthcare cannot be effective”, she added.

Dr Vinod K. Paul, Member, NITI Aayogunderscored two priority areas for the public health sector. “First is increasing the health budgets by the Centre and the States/UTs, and second in enhancing the health infrastructure. The NHP 2017 commitment to increasing the health budget cannot be achieved without States contribution”, he stated. He added that there is a need to engage more with the private sector for augmenting the efforts of the public sector to bring in equity to increase the number of beds and hospitals to meet the global standards of health infrastructure.

The Conference would deliberate on various issues in seven sessions, spread over 1 ½ days.

At the inaugural session, Dr Harsh Vardhan along with the other Ministers launched a new initiative – ‘Surakshit Matritva Aashwasan (SUMAN)’ for Zero Preventable Maternal and Newborn Deaths, its website and the grievance redressal portal.  As today is also the World Sight day, Dr Harsh Vardhan released the Report on National Diabetes & Diabetic Retinopathy Survey India 2015-19 and Report on National Blindness & Visual Impairment Survey India 2015-19 prepared with the support of AIIMS, New Delhi. In addition, along with other dignitaries, he also unveiled two info-leaflets on Suicide Prevention to mark the World Mental Health Day. Additionally, he released Guidelines on Drugs and Diagnostic Service Initiative; Guidelines for Biomedical Equipment Management & Maintenance Program; and the Guidelines for Peritoneal Dialysis under Pradhan Mantri National Dialysis Program.