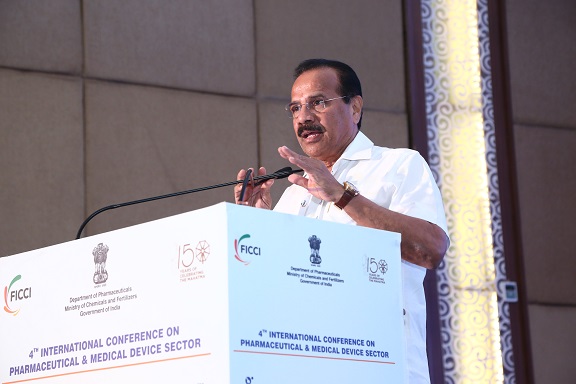 The 4th International Conference on Pharmaceutical & Medical Device sector, being organised by the Department of Pharmaceuticals (DoP), Ministry of Chemicals and Fertilizers, along with Federation of Indian Chambers of Commerce & Industry (FICCI), kickstarted today.

V. Sadananda Gowda, Union Minister for Chemicals & Fertilizers and Statistics & Programme Implementation, Government of India inaugurated the two-days event. "The Government’s focus is on improving access to affordable medical care and contribute to the National Health Protection Scheme, even as India continues to maintain its leadership position in manufacturing and supply of high quality generic medicines", he said.

Mansukh L. Mandaviya, Minister of State for Chemicals & Fertilizers, Road Transport and Highways, Shipping, Government of India, while stressing on the development of infrastructure and affordable healthcare through initiatives like Ayushman Bharat, said that the Government was taking measures to make the Indian pharmaceutical sector a Rs. 3 lakh crore market.

K J George, Minister for Large & Medium Scale Industries, Government of Karnataka, said that the state government plans to set up a special pharmaceuticals SEZ in Hassan and Pharma Parks in Bengaluru and Mangalore, which forms  a part of the Government of India’s aim of investing over USD 50 billion by 2025.

"Considering the increased involvement of the Micro, Small & Medium Enterprises in the medical devices manufacturing sector, WHO will provide technical support to the sector to upgrade manufacturing standards", stated Dr Henk Bekedam, WHO Representative to India

S Sridhar, Chairman, FICCI Pharma Committee pointed out that the industry believed in universal healthcare at affordable price for all Indian citizens, adding that this is a long term plan and requires a joint effort of the Government, industry and other stakeholders to collectively own this vision.

Badhri Iyengar, Chairman, FICCI Medical Device Forum, said that it was important to look at having a unified healthcare regulator which could act as a bridge between the industry and the Government to create one window for facilitating business.

A FICCI-KPMG Knowledge Paper “Evolution to revolution: by use of Artificial Intelligence and Advanced Analytics in pharma” was also released at the event.