The Centre was inaugurated at Jangla Development Hub, in the aspirational district of Bijapur in Chhattisgarh 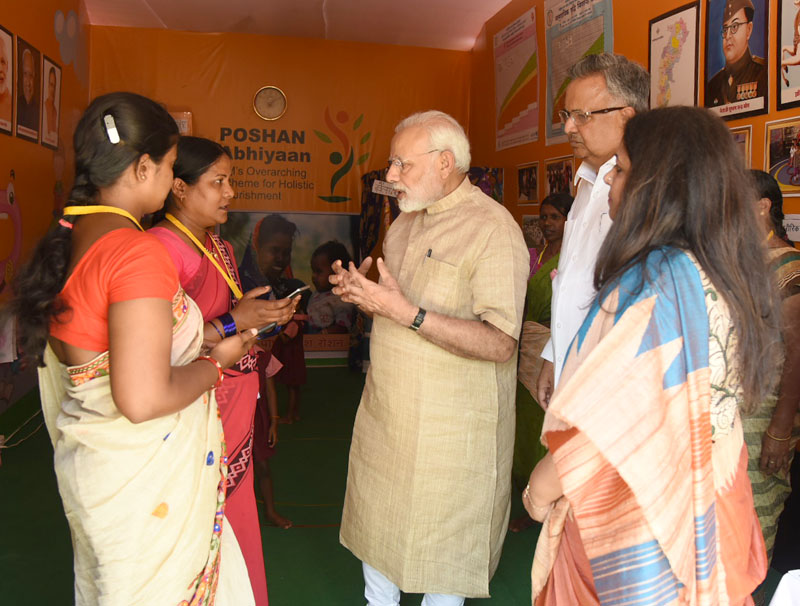 On the occasion of Ambedkar Jayanti recently, Prime Minister inaugurated a Health and Wellness Centre, to mark the launch of the Union Government’s ambitious Health Assurance Programme – Ayushman Bharat.

The Centre was inaugurated at Jangla Development Hub, in the aspirational district of Bijapur in Chhattisgarh.

In the course of over one hour, the Prime Minister interacted with a number of people, and was briefed on several development initiatives at the development hub.

He visited a Haat Bazaar Health Kiosk and interacted with health workers.

He inaugurated a bank branch at Jangla and distributed loan sanction letters under the Mudra Scheme to select beneficiaries. He also interacted with Rural BPO employees.

The Prime Minister then arrived at the venue of the public meeting. He launched the Van Dhan Yojana, which aims at empowering tribal communities. It envisages a mechanism for marketing of Minor Forest Produce through Minimum Support Price and development of value chain for MFP.

Via video conference, the Prime Minister dedicated to the nation, the Bhanupratappur-Gudum Railway Line. He flagged off a train between Dalli Rajhara and Bhanupratappur.

He also inaugurated a dialysis centre at Bijapur Hospital.

The Prime Minister laid the foundation stone for construction of 1988 km of PMGSY roads in LWE areas; other road connectivity projects in LWE areas; water supply scheme of Bijapur; and two bridges.

The Prime Minister said Babasaheb Ambedkar had a key role to play in the establishment of "aspiration" in the hearts and minds of crores of people.

Explaining the significance of holding this event in Bijapur, the Prime Minister said that Bijapur is one of the over 100 aspirational districts in the country, which have got left behind in the development journey. He said he wants to convert these districts, hitherto labelled as "backward" into aspirational and ambitious districts. These districts will no longer remain dependent and backward, he asserted. He said that if the district administration, the public representatives and the people all join hands in a mass movement, then, unprecedented results can be achieved. He said the Government is working with a different approach on these 115 districts.

“The Ayushman Bharat scheme will go a long way in ending social imbalance, and ensuring social justice in the country. In the first phase of this scheme, an effort would be made to bring about a sea change in primary healthcare. He said sub centres and primary health centres at 1.5 lakh places in the country would now be developed as Health and Wellness Centres. He said the aim is to complete this task by 2022. Health and Wellness Centres would function like a family doctor for the poor”, PM added.

He said the next target of Ayushman Bharat would be to provide financial assistance of upto Rs. 5 lakh to the poor, for medical treatment.

The Prime Minister appreciated the Chief Minister of Chhattisgarh, Dr. Raman Singh, for the development work done in the State over the last fourteen years. In particular, he appreciated the development initiatives carried out in the southern districts of Sukma, Dantewada and Bijapur. He said Bastar would soon be recognised as an economic hub. He emphasized the importance of connectivity for ending regional imbalances.

The Prime Minister asserted that the initiatives and decisions taken by the Union Government indicate its commitment to the welfare of the poor and weaker sections of society. In this context, he mentioned the Van Dhan Yojana, and other decisions taken for the benefit of the tribal communities. He mentioned schemes such as Swachh Bharat Mission, Beti Bachao – Beti Padhao, and Ujjwala Yojana, which have benefited women.

The Prime Minister asserted that people's participation is the strength of the Government, which will help in the creation of New India by 2022.