He also released the ‘Deworming Factsheet’ at the event 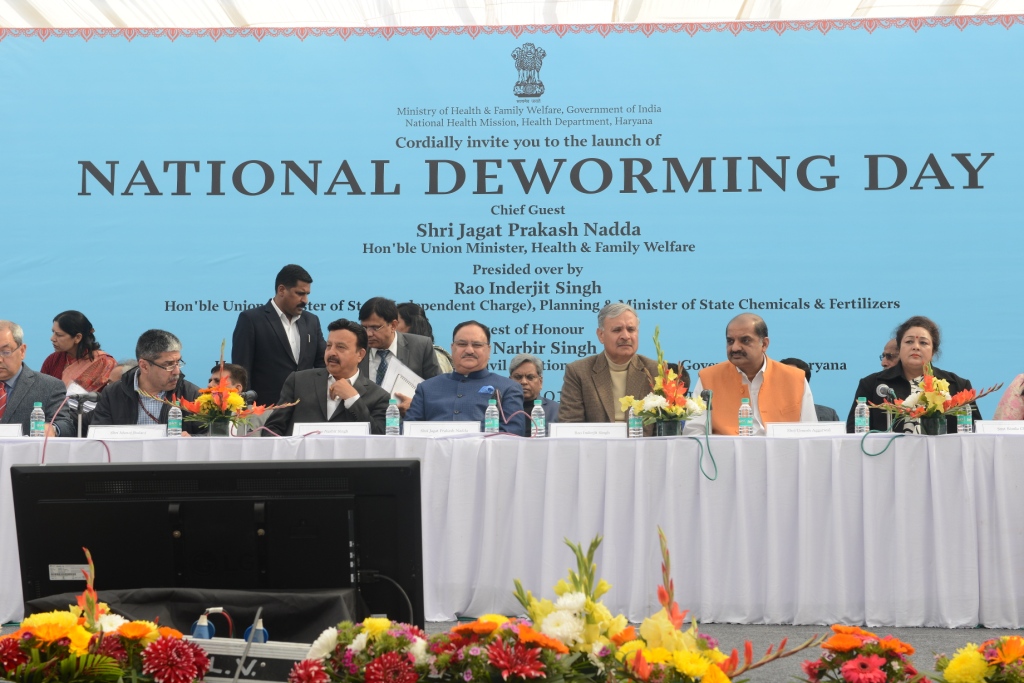 Speaking on the occasion he said, “Government of India is committed to ensuring high quality healthcare, accessible to every child and upto the last mile. One of the interventions, the National Deworming Day, is one of the largest public health initiatives in the world.”

Speaking at the function, the Union Health Minister announced that for this round of National Deworming Day, the Government is aiming to reach more than 32.2 crore children.

He further stated that the Ministry had first launched National Deworming Day (NDD) in 2015 which was implemented in 11 States/UTs across all Government and Government-aided schools and Anganwadi centres targeting children aged 1 to 19 years. Since then the program has been scaled up throughout the country. Shri Nadda further informed that last year 25.6 crore children in the February 2016 round and 22.8 crore children in the August 2016 round were successfully reached and treated with deworming treatment on National Deworming Day.

He also released the ‘Deworming Factsheet’ at the event.

Speaking at the function, Nadda said that the government prioritizes the wellbeing of children no matter which part of the country they live in and what their circumstances are.

“We follow a life-cycle approach in devising all our health programs, right from pregnancy till adolescence, we take care of the mother and the child to make them healthier and get their timely access to healthcare. Our programs like National Deworming Day, which is for all children, are ensuring prevention of cognitive disability as well decreasing the school drop-out rate of children by improving overall health of the children. All these initiatives move us closer to overall wholesome development of the country,” he added.

Urging all the stakeholders to come forward and participate in this initiative, Nadda stated that the aim of a worm-free India can be true only if we all join hands to make this program a success.

“I would request all health functionaries and health leaders to participate in the program and see to it that we make this program a success. Also I salute all our healthcare workers who have ensured the reach of this program to the grass root level”, he said.

He also urged all stakeholders and especially all public representatives to talk, generate awareness and discuss about health, as it is an very important factor in development of the country.

Nadda said, “The National Deworming Day will mobilize health personnel, state governments and other stakeholders to prioritize investment in control of Soil Transmitted Helminth (STH) infections—one of the most common infections.”

Further he said, “It aims to create mass awareness about the most effective and low-cost STH treatment— administering Albendazole tablets. The tablet has no side effects and in case the dose gets missed, MoHFW carries out ‘mop-up’ sessions, to ensure no child is left out. Along with Albendazole administration, behaviour change practices in terms of cleanliness, hygiene, use of toilets, wearing shoes/chappals, washing hands etc. is also important to reduce incidents of re-infection.”

Anganwadi and school-based mass deworming program is safe, cost-effective, and can reach crores of children quickly. Deworming has been shown to reduce absenteeism in schools; improve health, nutritional, and learning outcomes; and increase the likelihood of higher-wage jobs later in life. Deworming with the safe and beneficial Albendazole tablet is an evidence-based, globally-accepted, and effective solution to controlling worm infections.

To prepare for National Deworming Day, teachers and anganwadi workers have been trained to administer the tablet to children, while ASHAs and other functionaries will generate awareness and mobilize children to be dewormed on the day.

Other ministries and departments from Panchayati Raj, Youth affairs are also deploying their resources of panchayat members, youth volunteers and other community-based groups to engage communities towards a worm free India.

The first AMRIT pharmacy for the state of Haryana was also inaugurated by the Minister of Health and Family Welfare at the event.