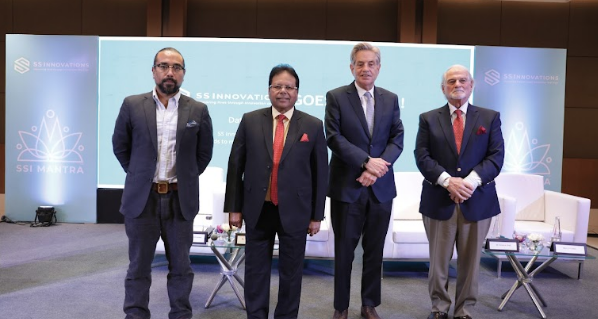 Gurugram-based startup SS Innovation has now gained access to global capital & market through the acquisition of a controlling interest in Avra Medical Robotics, a Nasdaq-listed company in the United States (US).

SS Innovations has made the nation proud by being the first company in South Asia to launch the first fully Made in India surgical robot SSI Mantra, a technologically advanced surgical robotic system that has more and better features and applications than existing systems.

Dr Frederic Moll, Father of Robotic surgery, graced the announcement programme as the Guest of Honour. Dr Moll is the founder of the world’s first surgical robot, the Da Vinci surgical system, and is world’s renowned medical device developer and entrepreneur, specialising in robotic surgery.

Dr Fredric Moll, Founder, Intuitive Surgical said, “Extremely excited to be here to witness the progress and development of a new robotic system that I believe is a great step forward for the general distribution of healthcare in the field of medical surgery. This system will provide the most advanced technology to patients around the globe, East and West alike. This technology is an opportunity to bring a major impact on contributing towards better healthcare and wellbeing of Asia and across her borders.”

Dr Sudhir P Srivastava, Founder, Chairman & CEO, of SS Innovations said “This acquisition will help us reach the global market. Our innovation will be used widely."

Avra Medical Robotics is pushing the transition from assistive to semi-autonomous treatments in healthcare with an initial focus on aesthetics. The company is constantly working on semi-autonomous systems. The Avra Robotic Treatment System (ARTS) allows providers to view a treatment plan and watch the treatment be performed purely by the robot using advanced guidance technology.