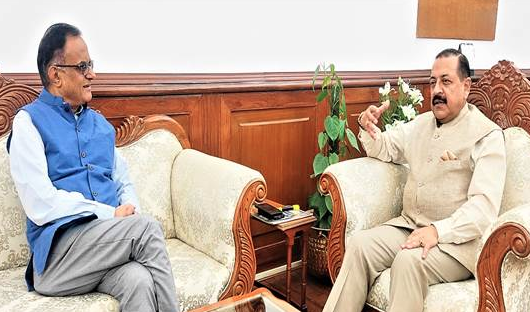 Dr Jitendra Singh asked Prof Sood to come out with a draft policy to identify potential startups in the country to make them sustainable through appropriate funding and technological interventions.

The Minister called for proactive hunting of startups to meet their funding needs by organisations like Technology Development Board and Biotechnology Industry Research Assistance Council (BIRAC) under the Ministry of Science and Technology. He also mooted the idea of roping in industry for giving a big push to the startup ecosystem.

The Minister also discussed with the Principal Scientific Advisor, the roadmap for effective implementation of ‘Integrated Approach in Science &Technology for Sustainable Future. He underlined that under the draft of Science, Technology and Innovation Policy (STIP) issues like inviting public suggestions for adding words related to startup and innovation, adopting ways to put India among top 5 in terms of quality of research outcome by year 2030, targeting 30% participation of women in science by year 2030, taking India within top 3 global leaders in STI by year 2030 and how can India achieve Atma Nirbharta in technology by year 2030 need constant brainstorming.