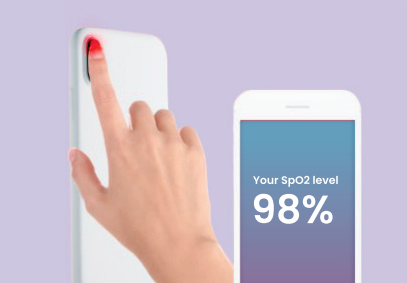 Digital Health startup MFine, based in Bengaluru, has launched the MFine Pulse, an app based SPO2 (blood oxygen saturation) monitoring tool which enables users to keep track of their oxygen saturation levels without needing an additional device.

Using the power of smartphones and AI, MFine Pulse helps users measure oxygen saturation using the phone camera and flash. In its beta roll out, thousands of users have already used the tool and currently hundreds of readings are recorded everyday.

Moving beyond telemedicine consultations and services, MFine is working on next-gen AI technologies which aims to convert the mobile phone into a rich diagnostics and vitals monitoring tool.

MFine will launch more such vitals monitoring & diagnostics tools in the coming days, elevating the use of smartphones as the new examination tool for vitals tracking.

The LED illuminates the skin and the smartphone camera measures the changes in light absorption. The signal is then broken down into Red, Blue and Green parts and using the difference in levels of light absorbed across these different wavelengths, SPO2 is calculated by a machine learning algorithm. Currently, the MFine Pulse SPO2 measuring tool features 80% medical grade accuracy.

The tool is in public beta for Android users and will soon be launched for iOS users. MFine is preparing for certifications of its algorithms, with data of hundreds of measurements to give medical grade accuracy and reliability to the algorithm.