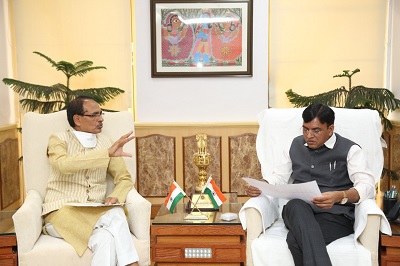 The Chief Minister of Madhya Pradesh, Shivraj Singh Chouhan, met the Union Minister for Health and Family Welfare and Chemicals and Fertilizers, Mansukh L Mandaviya to discuss the vaccination campaign being run in the state.

Chouhan informed that under the vaccination campaign being run across the country, the government is committed to administering both doses of the vaccine to 100 per cent of citizens of the state. In this sequence, the second phase of the vaccination campaign is being organised on August 25 and 26. Under the campaign, a target has been set to vaccinate a total of 35 lakh citizens in two days. Chouhan urged the Union Minister that to make the said campaign successful, the state should get an additional dose of 11 lakh vaccines by August 24 so that the campaign can be made successful. The Union Minister assured the Chief Minister that 11 lakh vaccine doses would be provided to the State Government by the Center by August 24.