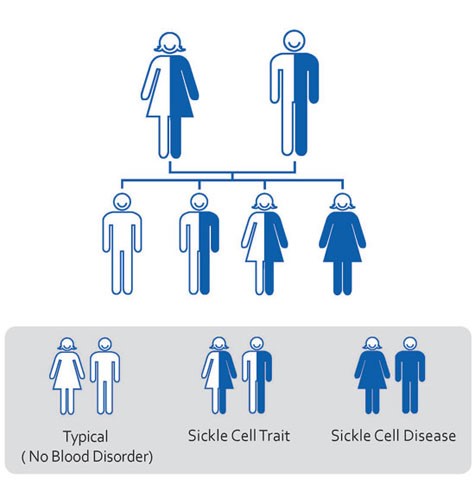 There are about 2, 75,000 infants born with sickle cell anemia every year around the world. It is a major public health problem in India affecting mostly the tribal population and prevalent in the states of Chhattisgarh, Odisha, Maharashtra, Gujarat, Madhya Pradesh, Telangana, Andhra Pradesh and some parts of Tamil Nadu & Kerala.

Mainly associated with malaria endemic areas and African lineage, sickle cell anemia has significant implications: higher morbidity and mortality, poor quality of life and lower life expectancy. Of 18 crore tribal population, approximately 1.80 crore people are the carriers of the disease while 14 lakh people have the disease.

As per the statistics of Indian Council of Medical Research (ICMR):

Sugana and Hukam belong to the Warli tribes of Valwanda village, about 100km away from Mumbai, whose family is in the grip of sickle cell disease. Sugana has been suffering from sickle cell disease since long but was diagnosed only last year in a health camp. Her six-year-old daughter Rani, also has the disease while her 1 year old son, Raja is yet to be tested. All she knows about the problem is – it is a blood disorder.

Sickle cell anemia (SCA) is an autosomal recessive genetic disorder resulting from inheritance of abnormal hemoglobin genes from both parents. A person having two copies of the abnormal gene has sickle cell disease while the one having only one copy of abnormal gene is said to be a carrier (sickle cell trait). Carriers don’t have the disease but can pass the same defective gene to their children. Hence it becomes very important to identify the carriers so that proper management options can be offered.

Currently the only cure for sickle cell disease is bone marrow transplantation. In this procedure, the patient is transplanted with bone marrow from healthy, genetically compatible sibling donors. However only less than 20 percent of children with sickle cell disease have a healthy, matched sibling donor. Bone marrow transplantation is a risky procedure with many complications. Gene Therapy does offer a promise of a cure but it is still in the experimental stages. Hence the only way to control the disease and its complications is by prevention or early diagnosis.

There are many ways through which sickle cell anemia can be diagnosed at an early stage and prevent the complications. But the main challenge is to make these tests accessible to the remotest village for better outcomes, coupled with educative & awareness building programs along with genetic counselling. Genetic counselling plays an important role to help the patients understand the disease, its management and implications.

Government’s role in tackling the disease

The Ministry of Health and Family Welfare has taken keen interest in working with various State Health Departments and Ministry of Tribal Affairs for conducting awareness programs, screening and counselling sessions for management of sickle cell disease. Different state governments like Gujarat, Maharashtra and Chhattisgarh are working with the National Rural Health Mission (NRHM) to establish centers for diagnosis, counselling and management of sickle cell disease. Gujarat was the first state to initiate the Sickle Cell Anemia Control program in 2006 in 5 districts which was later extended to 12 districts. The aim was to reduce sickle cell births, diagnose the disease early, create awareness of the disease and offer counselling to the needy. Many NGOs and corporates partnered with the government to screen the patients, where so far  9.2 million tribal people have been screened of which 7,29,561 are carriers and 29584 have the disease. All the cell sickle patients were provided with proper treatment while carriers were given marriage and pre-natal counselling. Recognizing these efforts of the state government, it was awarded with the Prime Minister’s Civil Services Award in 2011.

If other states also follow the model of Gujarat and have adequate systematic screening and treatment facilities in place, the disease can be well managed and will widen the scope of public health service delivery. While, we don’t have a comprehensive policy or framework to tackle sickle cell yet, the National Rural Health Mission may soon formulate a policy based on the recommendations of the third Global Congress on Sickle Cell Diseases held in February this year.