Telemedicine: A journey from vision to business model 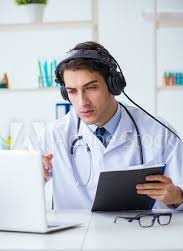 Among the technologies that are changing our world today, perhaps none is as transformative as telemedicine. Telemedicine makes it possible to bring world-class medical care to every corner of the world. The technology is especially needed in India, where there is only one doctor for every 1500 (approx) people. In comparison, the doctor to population ratio in the US is one doctor for 300 (approx) people. Telemedicine is also the need of the hour in India because residents of smaller Indian cities and towns don’t have access to quality healthcare. Residents of such areas often travel to larger cities when they need medical attention.

The vision behind telemedicine

A leading telemedicine clinic in India was born when a young man was injured in a road accident. As the accident occurred in a rural region, he could only be treated by doctors in the surrounding areas. During his treatment, he moved to Bareilly. Unfortunately late but his case caught the attention of one of the leading doctors in New Delhi. The doctor agreed to treat the young man in New Delhi, but due to the delay in the treatment, this young man had an irreparable damage to his leg.

This incident led to a paradigm shift in the mind of the accident victim. He realised that there were lakhs of people in India who did not have access to sound medical care. Acting on the belief that proper medical attention should be available to all, he worked towards building upon the vision of having a physical brick and mortar model of telemedicine clinics across India. Since the establishment of his first telemedicine clinic, there has been no looking back. Telemedicine clinics managed by him have been opened in numerous towns across India and have served tens of thousands of people.

A telemedicine clinic is like any conventional medical clinic except for one thing; in a telemedicine clinic, patients are examined by a doctor over a computer kiosk. Hundreds or thousands of kilometres may separate the doctor and patient; however, the doctor can see, talk, and listen to the patient.

While e-clinics certainly bring quality and advanced healthcare to every part of India, they are also backed up by a robust business model. Such clinics, despite being less expensive to establish than traditional clinics, are equally or more profitable than regular clinics.

The business model behind e-clinics

A telemedicine provider partners with doctors who practice in the most significant urban areas; such physicians may practice in leading hospitals like Medanta, Fortis, or Artemis.

Once a doctor is impanelled , he or she regularly consults with patients who visit e-clinics. The doctor connects with patients over a computer terminal that allows him or her to see, speak, and listen to patients. Because the physician can do everything that could be done in a face to face OPD, they can serve patients as well as or better than they can be treated in traditional clinics.

The business model works because doctors examine a large number of patients in a relatively short period and that too remotely.

The success of the business model also has to do with how the masses perceive such clinics. In most areas where e-clinics have been created, they have won the public over. Residents of small towns and cities do not view such clinics as novelties but rather as the preferred place to visit when they need medical attention.

Another reason that e-clinics are so affordable is that such clinics can be created in record time. Establishing an e-clinic takes just a few days. A reason for this is that such clinics dont need the kind of physical infrastructure a traditional clinic does. Every facility that is provided by the e-clinic is at the physicians; end. Hence, the only input cost of an e-clinic is that of a building, necessary infrastructure, and facilitator.

Telemedicine can also help to bridge the healthcare divide that separates those living in small towns, cities and villages in India from those living in urban regions. For instance, many people in rural India do not know how to use their smartphones fully. Hence they are unable to use apps designed to provide remote healthcare. Telemedicine bridges this digital divide. When patients visit a brick and mortar telemedicine clinic, they benefit not only from being examined by the doctor in such clinics but also from the remote healthcare infrastructure found online.

Since their birth, e-clinics have proven their efficacy. Patients treated at e-clinics enjoy a higher rate of recovery than those treated by doctors in surrounding areas. Furthermore, e- clinics are far more affordable than traditional clinics. An OPD at an e-clinic cost nearly halfas much as an OPD in a regular clinic.

Across India and especially in rural areas, telemedicine is helping bridge the healthcare gap. Those who live in small towns and cities in India are flocking to telemedicine clinics when they fall ill because, for the first time, they have the benefit of being examined by the world’s best caregivers. The technology and concept behind telemedicine are so robust that e-clinics are popping up all over the world. In areas where there is a lack of doctors, e-clinics serve entire communities. In short, the story of telemedicine is just beginning.