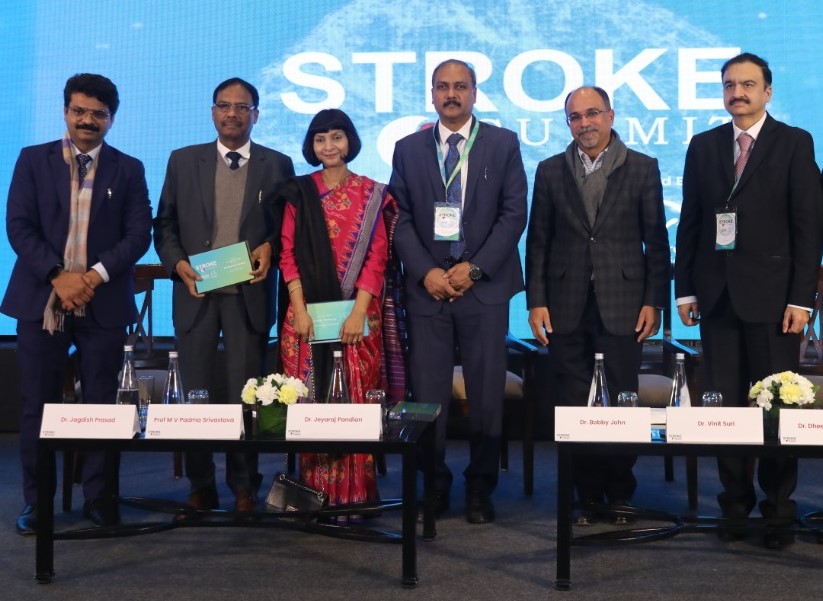 Noting that the incidence of stroke has in India increased almost 100 per cent in the past few decades, neurologists and public health experts recently called for an integrated and comprehensive approach to address the growing burden of stroke at the first Stroke Summit here organised by health think tank Integrated Health & Wellbeing (IHW) Council and endorsed by World Stroke Organization.

Noting that stroke is the leading cause of death in north-eastern states of India, surpassing cardiac problems and tuberculosis, Dr. MV Padma Srivastava, Head, Neurosciences Centre, All India Institute of Medical Sciences (AIIMS) says, “Stroke has become the 5th leading cause of death in 2016 from 12th cause in 1996 and claims 119-145 lives in every 100,000 population, which is almost a 100 per cent increase. Our stroke burden is enormous but we need more of small, India-centric solutions. Every year, 1.8 million people suffer stroke in India, but we have only about 2000 neurologists. We need to understand and acknowledge that ‘time is brain’ and plug the gaps such as lack of awareness, delay in arrival, and lack of centres offering thrombolysis. Thrombolysis is the game changer in the stroke management sector and mobile stroke units, like those in the northeast, can offer relief. We also need to look into amalgamating different approaches such as Ayurveda and homeopathy to bring the patient back into disease-free mode.”

According to the Global Burden of Disease study of 2013, 25.7 million people survived stroke, 6.5 million died, and 10.3 million new strokes were recorded. It also noted that the low-and middle-income countries (LMICs), of which India is a part, have witnessed more than 100 per cent increase in incidence of stroke whereas the developed countries have witnessed a drop of 42 per cent.

Highlighting that the average mortality of stroke in rural India is more than the country average, Dr. Jeyaraj Pandian, Vice President, World Stroke Organization (WSO), says, “Our study in rural India showed that mortality is higher than the Indian average. In Gadchiroli, Maharashtra, it was found to be 194 in every 100,000 population while rural areas around Ludhiana, Punjab, the mortality is 210 in every 100,000 population. The gaps in India include prehospital care, stroke services, thrombolysis and rehabilitation of stroke patients that we need to address to bolster our continuum of care.”

Ramdas Athawale, Union Minister of State for Social Justice and Empowerment said, “Stroke needs to be prevented and stroke care should be provided as quickly as possible because stroke can cause serious disability and many of the affected people cannot access rehabilitation. There are 1.6 crores disabled people in India as per the 2011 census, which is 2.1 per cent of our total population. Today’s Stroke Summit discusses the crucial need to talk about the stroke treatment. We need to work towards bringing down the percentage of disability. We are determined to expand education and insurance services to society in order to make people aware about the need to treat stroke. Our ministry is trying to empower them through an integrated approach and enabling access to physiotherapy and occupational therapy.”

Kamal Narayan, CEO, Integrated Health & Wellbeing (IHW) Council said, “India is facing a rapidly growing burden of diseases, especially the non-communicable diseases (NCDs). Stroke is definitely one of them – it often goes undiagnosed and even if identified, is not addressed on time. There is a lot of health activism around many other NCDs such as diabetes and cardiovascular disease, but stroke does not get similar priority or attention. India’s flagship healthcare program Ayushman Bharat has limited coverage of stroke that is a leading cause of death and disability. We need a more comprehensive coverage and act fast to make India stroke ready and eventually stroke-free – that no life or ability is lost due to stroke is what we aim to achieve.”

Every year, approximately 1.8 million people suffer from stroke, which is the second most common cause of death after coronary artery disease (CAD) globally. The summit will also host sessions discussing stroke burden, Programme for Prevention and Control of Cancer, Diabetes, CVD and Stroke (NPCDCS), upgrading the frontline healthcare ecosystem and the criticality of golden hour, and developing an integrated stroke strategy suitable to Indian context.

IHW Council is a not-for-profit organization that works towards creating awareness and advocacy for a healthier world.