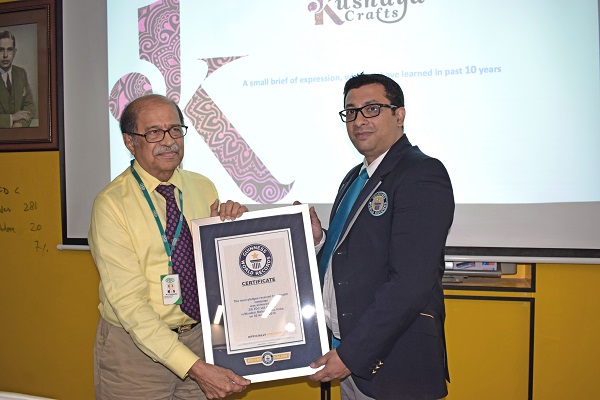 Mumbai based ZIFI-FDC has officially broken the GUINNESS WORLD RECORDSTM (GWR) title of the Most pledges received for health campaign of completing Antibiotic course.

Antibiotic Resistance is one of the major challenges that doctors are facing today worldwide. Antibiotic Non-Compliance has been one of major factors for Antimicrobial Resistance.

To address this raging public health concern of Antibiotics Resistance and Antibiotic  non-compliance, ZIFI-FDC Ltd. took the initiative and ran a campaign called ‘SANKALP’, where  FDC Spectra Field force involved  all key stakeholders like Patients, Doctors, Chemists and Paramedical staff by taking a pledge from them for completion of full course of Antibiotic therapy.

ZIFI took the initiative to educate maximum number of patients about the importance of completing the full course of antibiotic therapy and supporting Health care professionals (Doctor, Paramedical staff & Chemists)

FDC would like to thank all doctors, patients & Chemists involved in this social awareness of completing antibiotic course to reduce the AMR. This Global recognition is representation of FDC’s commitment towards wise Antibiotic usage and Compliance, where Mr G. C.Kandpal, Sujit Barge have lived the passion of protecting current Antibiotic with wise usage and Mr. Narendra Sharma has executed to the ground in coordination with FDC-Spectra Field force under the able guidance of Mr Masood Shauqi for completing the campaign in specified period. Along with this we appreciate the efforts of Mr. Kushal Bhagchandani (Kushaya Crafts) for conceptualising this work and getting the record achievement end to end.