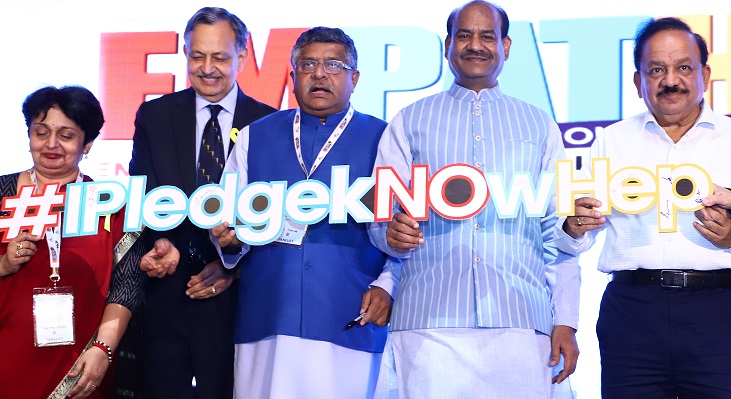 The Institute of Liver & Biliary Sciences has unveiled a major awareness campaign to educate people about hepatitis prevention and treatment as also to provide much-needed psycho social support to patients suffering marginalization in society.

The ‘EMPATHY Concave 2019: Empowering People Against Hepatitis’ brought together leading policy makers, healthcare experts as well as social activists to discuss the way forward in India’s fight against viral Hepatitis.

The country-wide awareness campaign is being implemented with support from the Airports Authority of India (AAI).

With 1.5 lakh deaths annually and almost 60 million Indians affected, viral hepatitis continues to be a serious public health concern. Most of the mortality due to Viral Hepatitis is attributed to Hepatitis B & C, which are also known as silent killers as > 80% of the infected aren’t aware of their infection. Hepatitis B & C infections can remain asymptomatic for years, even decades, slowly damaging the liver. Discrimination and marginalization of people living with the chronic infection is another major concern that needs to be addressed with a collective effort from the government and society.

Om Birla, Speaker of Lok Sabha; Dr Harsh Vardhan, Minister for Health & Family Welfare, and Minister of Law & Justice, Ravi Shankar Prasad were among the key stalwarts who attended the event and shared their insights into government’s efforts to fight the disease as well as address stigmatization of patients.

Dr. (Prof.)  S.K. Sarin, Director, Institute of Liver and Biliary Sciences said, “Fighting hepatitis is difficult because both hepatitis B and C are chronic infections that often remain dormant in the body for years before damaging the liver. Liver cirrhosis and liver cancer are common culminations of these chronic infections. The problems are manifold. Firstly, most people infected with the virus are not aware about their disease status. Only preventive screenings to high risk individuals such as those who have undergone dialysis or blood transfusions can identify dormant infections and treat them on time. Secondly, misconceptions and stigma attached to the disease often leads to marginalization and discrimination against patients. Our fight against the disease must focus on multiple fronts -- prevention of hepatitis B through universal vaccination, identifying and treating patients through screenings and providing psycho social support to patients.”

People who were discriminated against after being diagnosed with hepatitis B shared their experience at the conclave.

Awareness about safe blood transfusion and use of safe needles for injections is very important, Similarly, it is crucial to educate youth about the threat of hepatitis infection through unsafe needles used in tattooing and body piercing.

Chronic HBV infection accounts for 40-50% of hepatocellular carcinoma (HCC) and 20-30% cases of liver cirrhosis while chronic HCV infection accounts for 12-32% of HCC and 12-20% of liver cirrhosis in the country. Mother-to-Child transmission is considered to be the most common mode of transmission for HBV. However, the HBV infection is both preventable by a very effective vaccine as well as treatable with oral drugs. Improving India’s birth dose coverage of HCB vaccine is essential to our fight against Hepatitis B.

“Several initiatives are currently being undertaken by the Government under the National Viral Hepatitis Control Program (NVHCP), to improve access to vaccines, diagnostics and treatment for patients and those at risk. However, the stigma and discrimination associated with these infections is a significant hindrance to care-seeking, treatment compliance and mother to child transmission mainstreaming. That’s the reason of rise in hepatitis related deaths. It is vital to take steps to prevent the infection & keep your liver healthy. Through our EMPATHY conclave and associated campaign, we want to create a change in the mindset of the people,” said Dr. Sarin.

ILBS has been spearheading a nation-wide campaign to make people aware about Hepatitis B & C. EMPATHY Campaign is focused on generating community dialogue for empowering people against Hepatitis B & C, by implementing a mix of call to action initiatives, awareness camps, mass media and social media campaign in conjunction with each other. Over the last year, several initiatives have been undertaken, like creation of EMPATHY Network of People living with hepatitis B & C, several call to action initiatives, such as I pledge…(my support), Art For a cause, Let’s Talk Hepatitis, to name a few. Six-time world boxing champion, MC Mary Kom is now the brand ambassador for the Empathy Campaign. Educational content is being disseminated at Cinema halls, FM channels and airports across the country and metro stations. As part of the campaign, the work force in many organizations are taking pledges for the cause and to make people know about the disease and encourage them to disapprove any kind of discrimination against those living with Hepatitis.