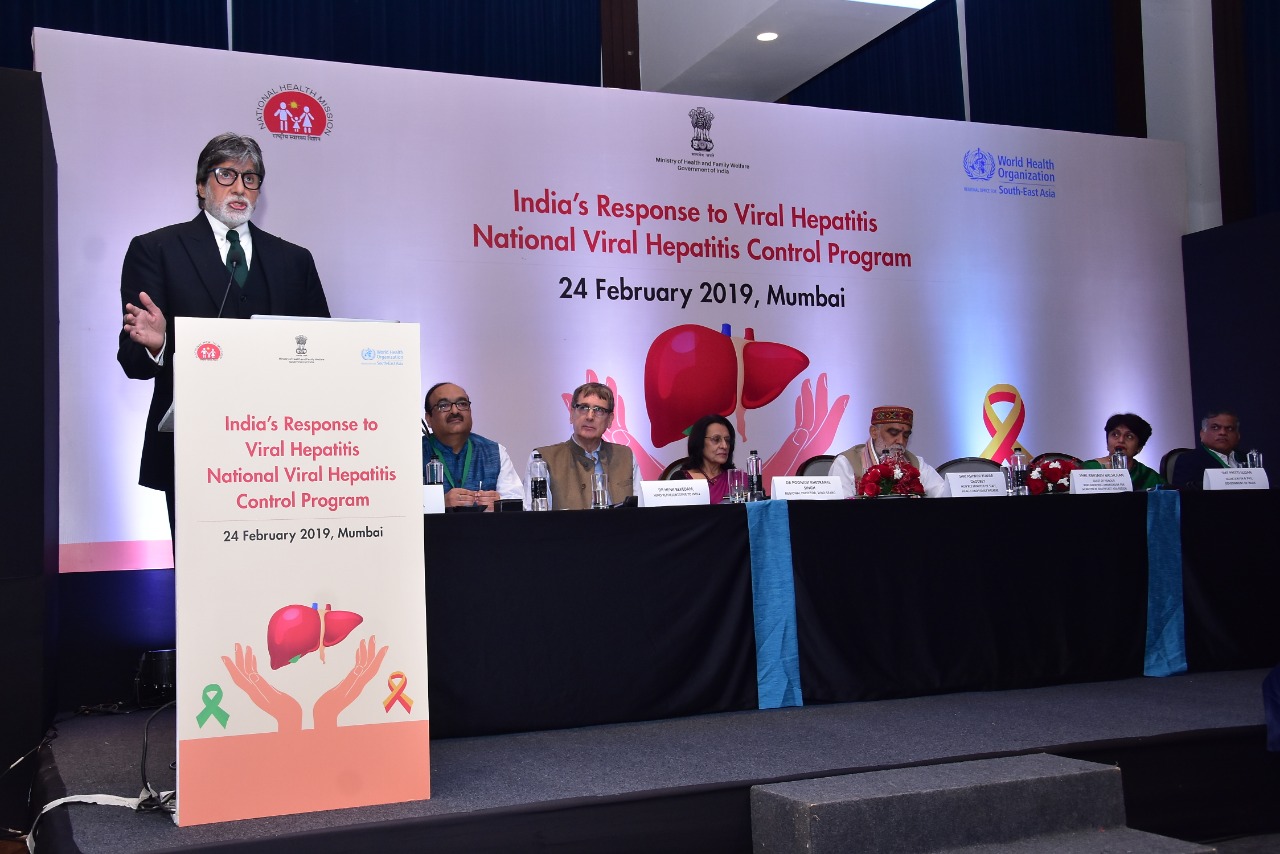 The World Health Organization and its Goodwill Ambassador for Hepatitis in South-East Asia Region, Amitabh Bachchan, have welcomed India’s national action plan for viral hepatitis which aims to reach life-saving drugs and diagnostics to over 50 million affected people across the country.

“The process of detection of hepatitis is important. If detected timely, hepatitis can be cured and I am an example of that,” said Amitabh Bachchan, a hepatitis B survivor who has been passionately advocating for countries to prevent, test and treat hepatitis. He was speaking at the release of India’s National Action Plan for Viral Hepatitis.

The Regional Director and WHO Goodwill Ambassador for Hepatitis were speaking at an event yesterday where Ashwini Kumar Choubey, Minister of State for Health and Family Welfare released the National Action Plan for Viral Hepatitis and the National Guidelines for Hepatitis B. The action plan, which is in sync with the WHO’s regional and global action plans, follows launch of the National Viral Hepatitis Control Programme on the World Hepatitis Day last year. The programme aims at comprehensively addressing – prevention, treatment and management of hepatitis A to E.

Free drugs and diagnostics will help timely detection, treatment and prevention of disease complications. People would get themselves treated without any financial hardship. I look forward to phased implementation of these guidelines and their introduction at all levels of the health system and assure WHO’s partnership and support to India in eliminating hepatitis”, added Dr Poonam

Lauding the contribution of WHO Goodwill Ambassador for Hepatitis, Dr Khetrapal Singh said there is now a momentum for hepatitis elimination in the Region. For the past two years Mr Bachchan’s passion, voice and generosity of spirit has significantly increased awareness of hepatitis, influencing policymakers and the public alike. His many initiatives as Goodwill Ambassador have effectively resonated that we can and we must eliminate hepatitis as a public health problem.

“If my voice can make a difference, I am willing to join the campaign for hepatitis whenever needed,” the Goodwill Ambassador said, adding that spreading awareness about hepatitis and ending discrimination, particularly against women affected by hepatitis B, is his priority.

WHO has been advocating for hepatitis B vaccine at birth and subsequent doses in routine immunization programme for children, safe blood and blood products, safe syringes and vaccination of health workers, among key preventive measures.

India has rolled out a number of cross sector initiatives for safe drinking water, sanitary toilets, and Swachh Bharat (clean India), which are also expected to contribute to prevention of viral hepatitis.