The event was presided by Defence Minister, Nirmala Sitharaman, who then launched the frame. 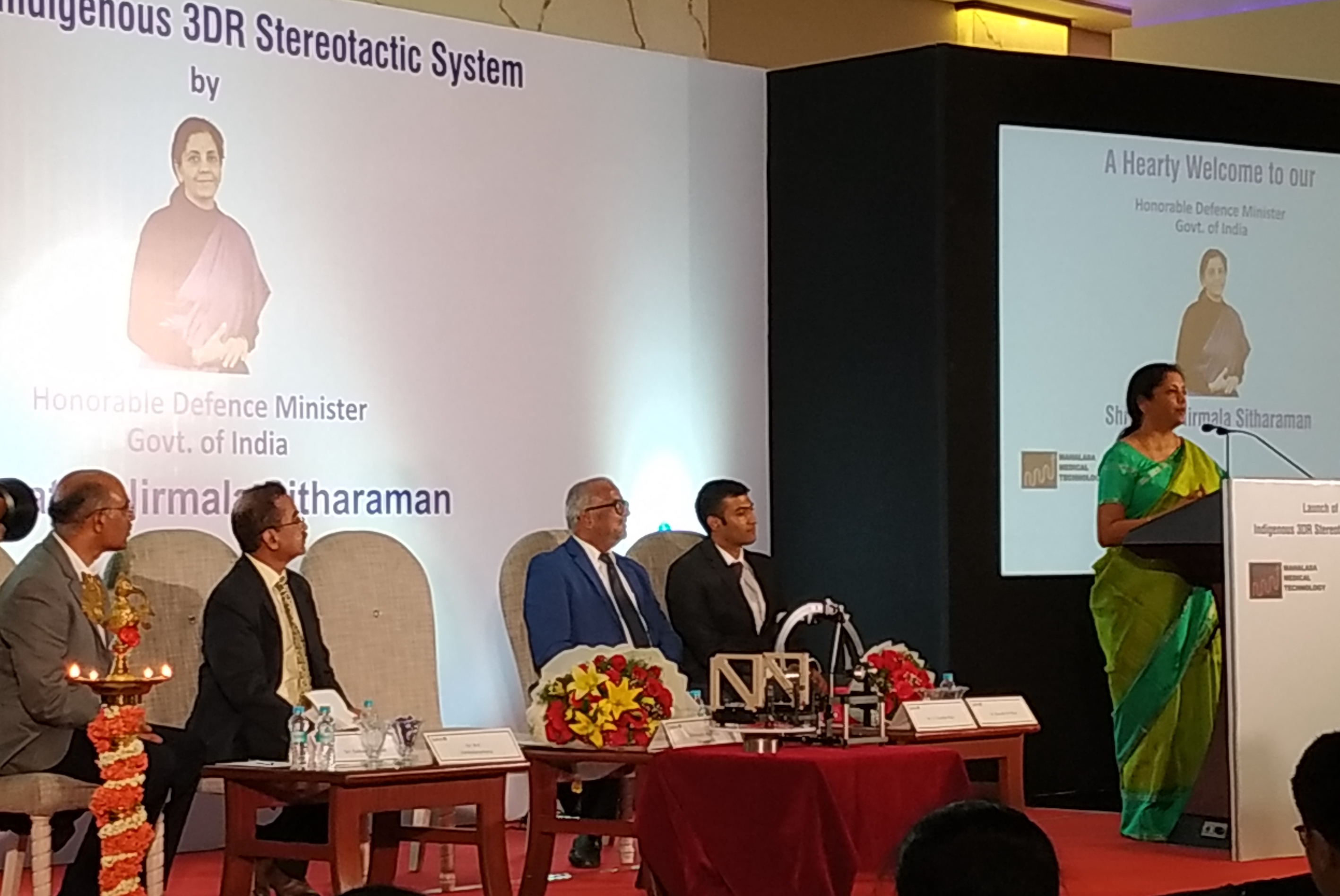 Addressing the gathering Honourable Defence Minister, Nirmala Sitharaman lauded the idea of the visionaries behind the indigenous Stereotactic Frame “3DR Stereotactic System”. Appreciating the teamwork of doctors, engineers and technicians from India who have toiled hard to come out with the piece of medical art she said: “Bangalore is blessed with people who are ready to make the national dream of Make in India a reality. I am sure the Government can do many such things and make it replicable in other areas as well. Make in India is not a futile call, it is a call for all of us.”

Speaking on the occasion CS Sunder Raju, MD, Atria Group, Director- BRAINS said: “This is a classical example of how clinical doctors engage with technological partners and try to translate the vision of government into reality. We are witnessing tremendous changes in the field of information technology and life sciences and these two are going to be aggressive in few years from now.  Creating the right environment to traverse the journey in the eco system is essential to make India a leader in life sciences.”

Dr. NK Venkataramama Founder Chairman & Chief Neurosurgeon, Brains Hospital, Bengaluru said: “Stereotactic and Functional Neurosurgery is one of the fast advancing sub specialty in Neurosciences. The clinical and research applications are fast advancing. It is a type of minimally invasive surgery performed with the assistance of a specially designed frame. This frame is fixed to the head that guides the surgeon to reach different, select and specific targets in the brain with precision. Stereotactic surgery or stereotaxy is a minimally invasive form of surgical intervention which makes use of a three-dimensional coordinates to locate small targets inside the brain and to perform procedures on them such as ablation, biopsy, lesion, injection, stimulation, implantation, radiosurgery (SRS), etc.”

Stereotactic surgery is used for brain biopsy of a tumor in the brain either deep seated or in an eloquent area. We can also do functional surgery for conditions like Parkinson’s disease, pain, epilepsy, movement disorders, conditions like cysts, abscess or blood clots can be treated in a minimally invasive method.  Many implantable devices can be deployed into the brain as well.

A stereotaxic apparatus is a device that is used, along with a brain atlas of coordinates, to precisely insert a recording electrode into a specific brain region. The apparatus utilizes a set of three coordinates (x, y, and z) to mark each point of the brain in the three dimensional space.

Speaking about the frame Dr Venkataramana said “Many such frames are available in the market but the cost is prohibitive. 3D Arc is an indigenous frame, conceptualized and designed at Bangalore (both hard ware and software). In addition it has been simplified adding 25 years of personal learning to make it user friendly and versatile. It is available at the 1/3rd of the cost of the imported frames and every Neurosurgeon can use it with confidence.

It was conceptualized by Dr. NK Venkataramana and designed to its completion by Bangalore based “Mahalasa Medical Technology“ spear headed by two innovative Biomedical Engineers Sadashiva Bhat and Sharath V Bhat.

This is a significant contribution to the field of Neurosurgery. This affordable device will benefit the concept of “Make in India” of our honorable Prime Minister and also will change the scenario of Stereotactic and Functional neurosurgery in India in the future years, Dr Venkataramana further added.

We earnestly hope that this humble contribution can benefit large number of  needy Indian patients.