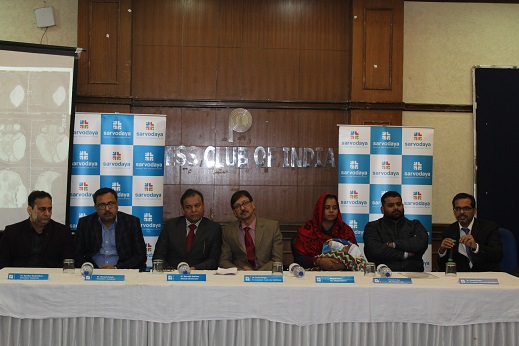 This is the first time in India that neurosurgery of such a low-weighing baby has been done by opening the skull and removing a life-threatening blood clot from the brain which caused a seizure in the neonate.

The premature baby was one among twins born preterm at 33 weeks to parents Deevakar Jha and Deepa Mishra. The baby, who cried late after birth, was referred to Sarvodaya Hospital for respiratory distress and perinatal asphyxia, where a team of surgeons led by Dr. Pankaj Dawar and Dr. Mukesh Pandey took the child under their supervision.

Explaining the case, Dr. Pankaj Dawar, Senior Consultant, Centre for Brain & Spine, Sarvodaya Hospital &Research Centre, said: “At birth, the baby weighed 1160 kg, but had perinatal asphyxia and respiratory distress thereafter and was immediately admitted to Sarvodaya Hospital. He was put on ventilator for five days. On the 19th day of his birth, the baby suffered from seizure.”

“A MRI scan revealed a large intracranial blood clot inside the skull, probably from bleeding disorder. On Day 19 of his birth and weighing only 1.160 kg, he was wheeled into the operation theatre for brain surgery. His skull was opened to expose her brain (mini-craniotomy) and the blood clot (hematoma) was successfully removed. With this, he has become the baby with the lowest weight to ever undergo brain surgery in India and probably in the world”, he added.

Dr Manish Pahuja, Consultant, Department of Anaesthesia, Sarvodaya Hospital and Research Centre said, “Brain surgery of a baby of such low weight has not been done before in the country. This requires very careful consideration and specialized equipment for anaesthesia."

As per Dr Sushil Singla, senior consultant and HOD, Department of Paediatrics, Sarvodaya Hospital and Research Centre, "presence of a blood clot in the brain of a baby of such age and low weight posed a huge challenge for us. If untreated, the condition would have proved fatal.”

“Even if the baby had survived, he would have suffered from neural problems and the brain would not have developed fully. After successful brain surgery and removal of the blood clot, the baby is perfectly fine. He is gaining weight and meeting all neural milestones adequately at last follow up visit”, he added.

The condition would have proved fatal had it not been treated promptly. Sarvodaya Hospital has applied for LimcaBook of Records and Guinness Book of World Records to recognize this unheard-of surgical feat.