Thousands of Mumbaikar’s join Walkathon to remember those who cannot remember and create awareness for Alzheimer’s and Dementia. 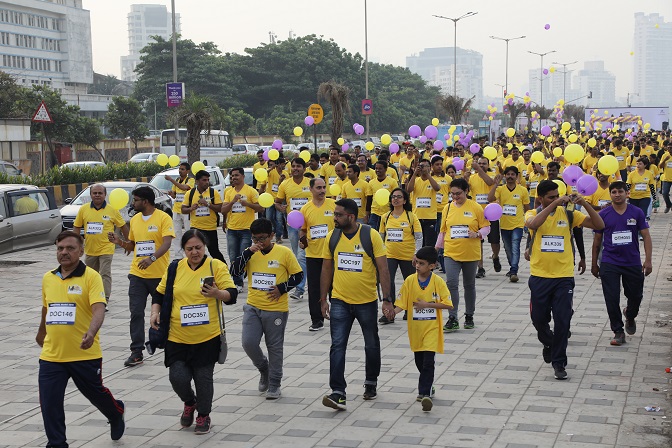 The Alzheimer’s & Related Disorders Society of India, Mumbai Chapter (ARDSI) in association with Alkem Laboratories Ltd organised ‘Awarathon’, a 3 kilometre walkathon for the second consecutive year recently at Worli Seaface. Thousands of Mumbaikar’s participated in Awarathon this year; patients, caregivers, doctors, corporates, government officials, NGOs, volunteers, youth came together to support and remember those who cannot remember and are suffering from memory loss.

Alzheimer's disease is the most common type of Dementia, an overall term for conditions that occur when the brain no longer functions properly. Alzheimer’s causes problems with memory, thinking and behaviour. In India, more than 4 million people have some form of Dementia. The Alzheimer’s and Dementia burden in our country is forecasted to reach almost 7.5 million by theend of 2030. Worldwide, at least 44 million people are living with Dementia making the disease a global health crisis.

Vidya Shenoy, Secretary General, ARDSI  & Hon. Secretary, ARDSI Mumbai Chapter said,“Remember Those Who Cannot Remember’ for ‘Every 3 seconds someone in the world develops dementia’. Let us hold hands and work towards a dementia friendly community by handling those affected by dementia with empathy and patience”. Am pleased and grateful that at the last year’s Awarathon, Hon. Minister for Health & Family Welfare, Govt. of Maharashtra, Dr. Deepak Sawant as Chief Guest had promised and assured to support our efforts for the cause of dementia. We are very happy that 7 district hospitals now hold regular Memory Clinics and a Mental Health Authority for the State of Maharashtra has been set up”.

Sandeep Singh, Managing Director, Alkem said, “Our country accounts the third highest caseload in the world, after China and the US in Alzhiemer’s. A diagnosis of Alzheimer’s is life changing for the person with the disease, as well as their family and friends.” He further said, “We are happy to partner with ARDSI, Mumbai Chapter and supporting their initiatives for this social cause, as there is a real need to spread awareness and increase screening of Dementia. Our social media initiative is a step ahead to spread awareness so that people can recognise symptoms early and get the right treatment.”

Last year, Alkem’s campaign, ‘A walk to remember for those who cannot remember’, took a huge leap on most social media platforms followed by this year’s campaign ‘I Remember’, which portrays the threatthat Dementia & Alzheimer’s patients have to face with when challenged byloss of memory or #MemoryBlindness.

Alzheimer’s and Dementia in India is a hidden problem, only a tiny fraction of patients are formally diagnosed or treated. Most Indians still consider memory loss as an inevitable part of ageing, rather than signs of a degenerative disease. This must be dealt with through active public awareness campaigns that aim to build a safer platform for people with Alzheimer’s and Dementia.