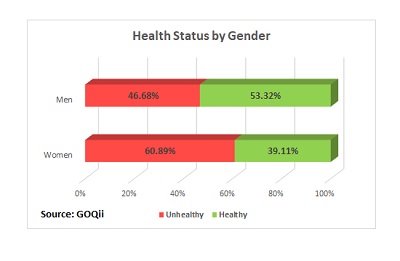 GOQii's India Fit Report 2022 recently conducted 'COVID-19 Trust in Vaccines and Vaccination’ survey with over 10000+ users. The report tells us how 91 per cent of Indians feel vaccination will protect them from COVID-19. Around 9 per cent of the respondents still doubt the vaccination process. Some of the respondents thought about whether it will work on upcoming variants. The report also showcased various aspects of health across parameters such as steps taken, lifestyle diseases, BMI, nutrition, water, stress, sleep etc.; all of which are classified according to gender and key cities.

India Fit Report 2022 is a result of a year-long study of more than five million GOQii users.

For diabetes, Bhopal, unexpectedly, has the highest rate followed by Chennai, Bhubaneswar and Lucknow. The percentage of persons who have never been sick has increased by about 3 per cent from 30.01 per cent in 2020 to 33.39 per cent in 2021. GOQii users in Pune city are clocking the most number of steps. On average Pune is clocking 5252 steps followed by Chandigarh, Mumbai and Bengaluru.