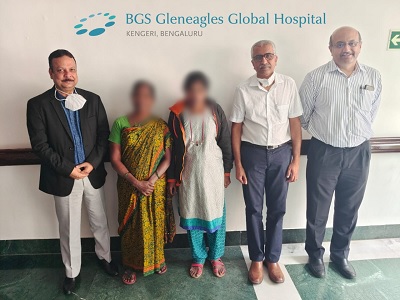 A 29-year-old woman from Bengaluru was treated successfully for recurrent fatal intestinal obstruction at BGS Gleneagles Global Hospital. The patient was born with Imperforate anus (inability to pass Motions at birth) for which she went through four complex surgeries from childhood to adolescence. However, post these surgeries she had multiple episodes of intestinal obstruction which forced her to get admitted to BGS GGH hospital. Doctors performed a complex seven-hour surgery to perform Imperforate anus which is a rare birth defect.

Removal of at least a kg of hard and concrete stool from the non-functional large rectum along with the removal of the non-functioning rectum was performed. The cut end of the left colon was confirmed to be healthy and then brought out on the left side as a stoma. This procedure rectified the recurring obstruction issue, pelvic pain issue, rejoining the small intestine ends which were functional but were unused and a stoma of the left colon to ensure clear passage of waste. The recovery period on this surgery was two weeks and now the patient is doing very well. The hospital ensured that her immediate and future needs for appliance costs and accessories are taken care of after negotiating a free service from the coloplast team.