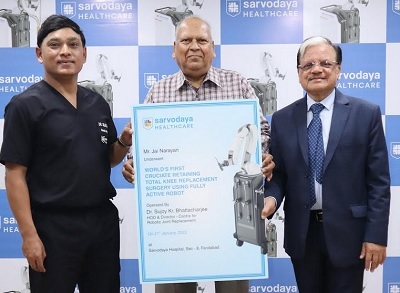 In preparation for the surgery, a non-contrast CT (NCCT) scan of the knees is conducted and the desired bone cuts and implant size are decided. This information is fed into the robot before the actual surgery. During the surgery, the bone cuts are conducted with great precision by the robot, minimising the possibility of errors.

During Cuvis Joint Robot total knee replacement, the 3D images of the patient’s joint are used by the doctor for pre-planning of the surgery personalized to the patient. The doctor uses the robot to select an artificial joint for the patient and insert it accurately. The 'fully active' robot reviews the data and cuts the bone precisely with respect to the dimensions of the implant decided during the pre-surgery planning stage under the supervision of an experienced surgeon.